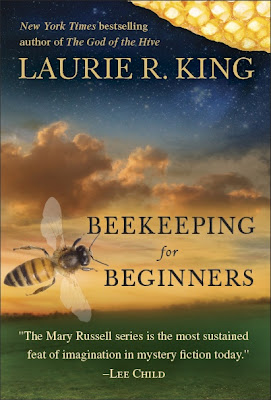 It seems every company, large and small, comic and print, audio and video, so on and so forth, has a Holmes product these days.  Most of them deal with Sherlock directly, but many also veer off into Watson’s life, Mycroft’s adventures, and Moriarty’s machinations.   And amongst those varied adventures of truly the World’s Greatest Detective, many are good, but very few stand out as works that both honor what came originally and bring a whole new life to the concept.
Laurie R. King is known for doing just that probably as well as anyone has.
‘Beekeeping for Beginners’ gives readers the first meeting between Mary Russell, King’s very own character inserted into the life of, at the opening of this story, an extremely despondent Holmes.     Both new readers and long time followers of King’s Russell/Holmes series will find this story to be a true delight.  Questioning his very place in the world with the War to End All Wars in swing and seemingly the time for one such as him past, Holmes comes to a decision at the opening of this tale that, had a young brash girl not happened along, would have made for an extremely short story.
What ensues after this rather spirited trip away from the melancholy is both a great adventure that revives Holmes and a fantastic character study that adds flesh to Mary Russell.   The pacing is brisk and the characterization crisp and quick as well.   Russell makes a formidable partner for Holmes, able to verbally spar with him, but also willing to learn and play student to the master.   What comes after this opening segue in the series makes perfect sense with this glimpse into their first meeting.
FIVE OUT OF FIVE TIPS OF THE HAT- Some people bemoan when people go back and give ‘origins’.  In this case, King did nothing but add another great piece of literature to her already wonderful collection of tales.
Share