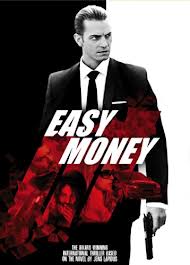 Thanks to Steig Larson, there’s a perceived appetite for all things Swedish so some of the more stylish or interesting books and films are coming over here in drips and drabs. The most recent import is Easy Money, a film that benefits from a moral gravity underlying the crime tale. Adapted by director Daniel Espinosa from Jens Lapidus’ 2006 novel Snabba Cash, it tells the story of a student, JW (Joel Kinnaman), who falls for Sophie (Lisa Henni ), an heiress so turns to crime in order to keep up with her lavish lifestyle. You just know things are going to spiral out of control this point on so the key for the production is keeping us in plausible suspense and entertained. Sure enough, he crosses the Serbian mafia and gets embroiled with Jorge (Matias Padin Varela), a fugitive from the mob. It’s dark and violent and messy.

While released in Europe back in 2010, it came here last year courtesy of The Weinstein Company and was met with more yawns than praise. (After winning the bidding war for the remake rights, Warner Bros. turned it over to Zac Efron to produce and start, but we;’ll see what happens should this ever get made.) Still, the film was a box office smash in its home country and did well throughout Europe.

It has enough testosterone fuelling the opening sequences to hook jaded American audiences complete with violence, a prison break out and fast cars. Kinnaman, best known to audiences for his work in The Killing, is an appealing underdog we’re rooting for in the first third. You can see why he falls for the sexy blonde beauty Henni and why he might risk everything for her. Espinosa, though, careens from shot to shot and the narrative loses cohesion by the midway point and the audience stops caring by the time we get to the climax.  There might be too many threads crying for attention for the director to properly service and more condensation might have been required.

The core remains the conflicts and consequences of choices made by the main characters, all of whom are trying to get out from under crushing burdens, which makes this more than your typical crime noir.

This is a pretty bare bones DVD release from Starz/Anchor Bay with nary an interesting extra so the decision is up to you if the story is enough to spring for the disc.