MARTHA THOMASES: Grimm – Once Upon a Time 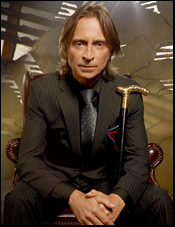 As I wrote a few weeks ago, this is a great time to enjoy non-realistic fiction. Technology has evolved to the point that, even with no budget, people can tell the most fantastic, unimaginable stories without spending millions of dollars.

As an example, there are two different broadcast network television shows this year based on classic fairy tales. They’re very different, appealing, I suspect, to different audiences. Let’s discuss.

NBC’s Grimm is, in my opinion, the better show. It’s premise is that there is a race of people, Grimms, who hunt down supernaturally evil creatures from folklore, like trolls and ogres and giants. The last Grimm is a young married police detective, Nick Burkhardt, played by David Giuntoli (who looks a lot like Brandon Routh). He is helped in his investigations by a charming werewolf, Silas .

As you might expect from that premise, this series owes a lot of its structure to Buffy, the Vampire Slayer. So you won’t be surprised that the producers worked on Buffy show and the spin-off, Angel, as well as movies. The other two producers have experience in comedy.

The show is paced very much a police procedural, with a crime committed at the beginning of the show that must be solved by the end. The only difference is that the criminals are almost all supernatural, and Burkhardt is the only one who knows. There’s also a continuing story about some kind of conspiracy against the Grimms, one that the chief of police seems to be in on. The relationships among the characters seem real, the town seems like a place where people actually live, and the hero is happily married (at least so far), which is refreshing. Too many shows rely on the sexual attraction between two characters and a “will they or won’t they” dynamic to provide suspense.

By contrast, Once Upon a Time is much more of a soap opera, which is appropriate, given that it’s the lead-in for Desperate Housewives. The premise here is that the fairy tale characters have unknowingly left their dimension because of a spell by the Evil Queen, and now live Storybrooke, with no memory of their true identities.

As with Grimm, every week there is a mystery to solve. The sheriff, Emma Stone, is a former bail bondsman who was brought to Storybrooke by her long-lost son, Henry, who was adopted by Regina, the Mayor. As you might expect from that name, Regina is the evil queen.

Appropriate to a series with a queen, Once Upon a Time is campy fun. There are lots of knowing winks to Disney films, and the comic book rack at the drugstore has only Marvel titles. The child psychologist who works with Henry is, in the fairy tale universe, Jiminiy Cricket. Hilariously, his name on our world is Archie.

Best of all, the mysterious Mr. Gold is played by Robert Carlyle, an actor who can do anything. In Trainspotting, he was a scary psychopath. In The Full Monty, he was adorable. He was a Bond villain. He was Hitler. This show doesn’t give him enough to do.

The Evil Queen is always evil. The good guys are always good. The characters are not as complex as those on Grimm. However, half the time, they get to dress up like royalty.

As I said, I think Grimm works better overall. If you can only watch one, choose that. I can’t imagine why you would have to so limit yourself. Maybe that will be next season’s fantasy series.