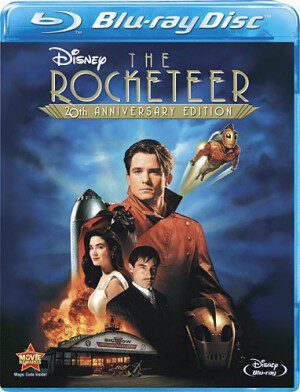 For a movie based on a comic book set in the 1930s, The Rocketeer was actually ahead of its time. The movie was released as Disney’s big summer film in 1991, backed with tons of marketing, and planned as a big tent pole for their future.

The problem was, in 1991 there were precious few superhero movies creating a genre to support the fan following. When it opened that June there was nothing out there to support it and the groundswell of geekdom had yet to reach critical mass. Therefore, despite relatively positive reviews, the movie did minimal business, finishing 27th for the calendar and largely forgotten. Its director, Joe Johnston, went on to make a number of other hits and misses until he scored big earlier this year with Captain America. Now, taking his fame and the 20th anniversary into account, Walt Disney Home Entertainment has released [[[The Rocketeer]]] on Blu-ray and DVD today.

The movie is incredibly faithful to the comic book stories meticulously crafted by the late (but not forgotten) Dave Stevens. He is credited as co-producer after selling the film rights in 1983 and watched it languish in development hell. It’s clear his vision was instrumental in the making of the movie. The comic was a tribute to the 1930s movie serials, when men were stalwart heroes and women needed some rescuing. It was here that Stevens also touched a vein in the public consciousness, making the heroine resemble pinup queen Bettie Page and reigniting interest in her and her work.

The film is very well cast with Bill Campbell in his first starring role as pilot Cliff Secord, and he’s surrounded by a stellar supporting cast anchored by Alan Arkin, Paul Sorvino, and a deliciously scenery-chewing Timothy Dalton. Terry O’Quinn is almost recognizable with hair and fewer wrinkles, but he’s on hand as Howard Hughes, designer of the rocket pack that has been stolen but falls into Secord’s capable hands. Of course, the Nazi spies want it back to replicate and create a flying army to secure Germany’s victory.

While figuring out what’s going on, regular guy Secord is also trying to keep tabs on his wanna-be actress Jenny, played by innocently by Jennifer Connelly.

So, why didn’t the movie hit if it was so cool? Part of the blame can be handed to Danny Bilson and Paul De Meo (the men behind CBS’ The Flash) for a script that kept Secord a tad too dimwitted and didn’t present us with any real surprises. Johnston’s direction is lackluster and the pacing is never quite right. The speedy tempo of the similar Raiders of the Lost Ark perfectly nailed what audiences needed and this one just missed opportunities time and again. The film is not helped by a James Horner score that has echoes of all his preceding soundtracks so you feel you’ve seen and heard it all before.

It’s still charming to watch because everyone plays their parts earnestly and they are clearly having a good time. Even Tiny Ron, stuck under layers of Rick Baker makeup, lumbers his way as a hulking menace.

The movie is literally the last of an era. A week or so later, Terminator 2 opened and we saw the promise of CGI special effects. The effects for the flying and the climax aboard a zeppelin have a distinct charm, perfect for a period film.

So yeah, it’s incredibly faithful but far from perfect. It’s still worth watching and the restoration given the film makes the DVD look pretty nifty. The colors and the sound are sharp so the effort is certainly appreciated. Both Blu-ray and DVD are devoid of extras beyond the original trailer.