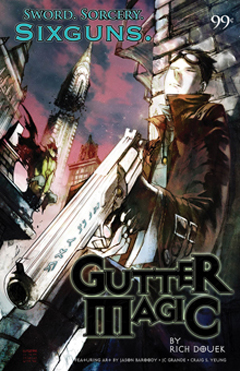 Something about the urban landscape emphasizes the human condition. Maybe it’s the close contact of your neighbors. Maybe it’s the partial grime left exposed. Maybe it’s simply the notion and stigma that bad things happen on the streets. Whatever it is, fiction always seems to capitalize on it. Authors and artists enjoy looking toward the mean pavements to either observe or use them as a backdrop, and by the time the final product reveals itself, it’s clear the harsh, unforgiving landscape brings out the worst, or at least questionable, in its subjects. This is what writer Rich Douek gets right in this zero issue preview of the forthcoming comic, Gutter Magic.

Gutter Magic blends the fantasy genre with a hint of crime to present a story that’s really about the characters and their determined faults or problematic situations. This zero issue contains sixteen pages of more or less setup material, but within only sixteen pages writer Rich Douek manages to cover three members of his cast and somewhat establish who each of them are.

But, yes, back to the fantasy/crime blend. I have to pat Douek on the back for the choice because, really, it gives what could be just another fantasy series a little more heart. Fantasy, at least for me, tends to lack any point of connection for the audience. Fantasy stories rely heavily on super-fictionalized elements. Some stories go as far as to create completely new technologies, languages and beliefs, and because of this I typically cannot place myself within those worlds or even character’s heads. Also, I really don’t find many of the fantasy elements or conventions exciting or even remotely interesting. Swords? Spells? Elves?

But that’s where the streets come in. The cast contains the expected wizard, young girl, elf (troll?) and wizard (number two), but Douek fuels our interest by standing his characters against a familiar background of street corners and muck. The trick moves most likely unrelatable characters into a realm where their faults show and they are humanized, and this gives the comic its element of weight as well as pathos. Douek’s script only really succeeds in one of his three chapters, though. This is where I slight the comic.

The fault of Gutter Magic falls on the execution. While the choice to blend genres and focus on more character driven tales interests me, the writing isn’t completely there. I feel Douek manages to do what he can in the span of sixteen pages. His first story “Gutter Magic” succeeds the most at establishing a character, a conflict and what most likely will be a journey for the series. Douek fits all of the information in there and scripts the chapter well enough that the reading experience feels smooth and enjoyable. I cannot necessarily say such for the other two chapters. “Nice Work” says very little about the female lead, and “Havoc’s Hand” reads a bit like a jumbled mess as it attempts to deal with an assortment of information.

I feel part of the fault falls on Douek’s choice to throw the reader right into the stories. While that approach usually works best to engage an audience, I’m not sure Douek’s writing is strong enough yet to pull it off. 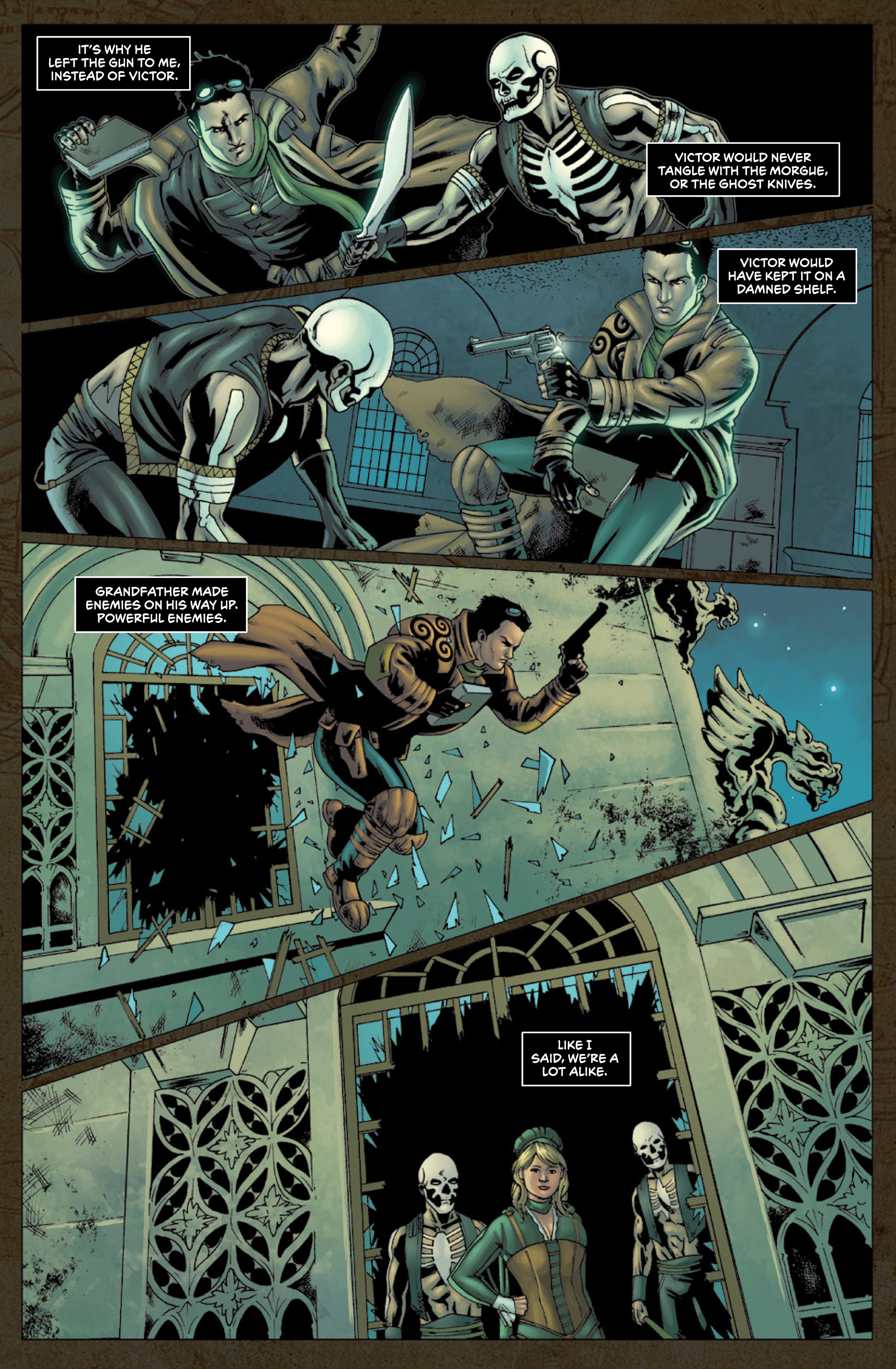 I’ll also say that the comic lacks in its visuals, despite its heavy-hitter artists. J.C. Grande clearly, to me, possesses the most skill as an illustrator because he can tell the story. I look at his pages, and I know that without the word balloons I would understand the comic’s plot. The case is not much the same for Jason Baroody or Craig S. Yeung. Both artists can compose a few nice panels, but the continuity between those panels lacks in areas. The motion necessary for sequential art isn’t there, and the stories lack the needed visual excitement. Style wise all three artists offer little. The artwork appears in a simple state, and you could easily see such drawings other places with ease. The coloring also attributes much to this. Although, I’ll give Yeung some credit. I feel his artwork attempts something different. It just doesn’t pull it off.

But, overall, the comic is not terrible. I feel Douek and company have established themselves a nice little world here, and I see room for growth for all the creative people involved. If anything, Gutter Magic has the right idea. I feel the book knows what it wants and sells enough of a tone to invite a reader back for more. The production crew just needs the time and experience to take it somewhere.

TL;DR Gutter Magic offers an interesting blend of genres yet lacks in execution. The comic, along with its creative team, shows room to grow and improve, though, and this could be a very good book in the long run. If you’re willing to stick it out.

Gutter Magic is written by Rich Douek, drawn by Jason Baroody, J.C. Grande and Craig S. Yeung and self-published by Sixgun Comics. Rich also works with Elevator Pitch Press. You can read a preview of the comic at Sixgun’s website. Or you can download a free preview PDF from the publisher from this link.

A copy of Gutter Magic was graciously provided to Spandexless by the author, Rich Doudek.