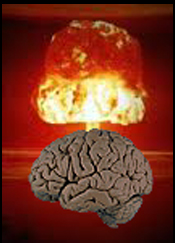 People with cancer describe a phenomenon they call “chemo brain,” a side effect of the tumor-killing drugs that also destroys their short-term memory. I would like to coin another term.

Con brain is what happens to an otherwise mature adult after several days spent in the company of a hundred thousand comic and pop culture fans enclosed in a relatively small space for a comic book convention.

My experience started out simply enough. My friend, Vivek Tiwary, was on a panel at Jim Hanley’s Universe on “A Celebration of Pop Music Comics”, and he wanted me there, since I helped him to get the deal for his graphic novel with Dark Horse. The panel included friendly faces like David Gallaher and Jamal Igle. To my surprise, it also included Punk Magazine editor John Holmstrom, whom I’ve known for decades and who, in my opinion, is the most ripped-off person in comics and graphic design (a bold statement, I know, and too long an explanation for this column. Ask me later). Both Vivek and John gave me shout-outs, proving that I am the most important person in the rock’n’roll/comics intersection.

The next day, I went to the Javits Center early for a meeting. As it turned out, the hall was closed to anyone but exhibitors until later in the afternoon, but I know how to stride in with a group like I belong, so that wasn’t an issue. Everything went swimmingly. Alas, I made the mistake of leaving the hall, and had to use my hard-won knowledge of the building’s labyrinthine tunnels and hallways to get back in.

By the time the show actually opened, things quickly got so crowded and noisy that I couldn’t hear any of the people with whom I was walking, nor could I see where I was going. I went home, put a cat on my lap, and chilled.

On Friday, I had the most surrealistic experience of the show. I attend a bereavement support group that meets near 34th Street. When it was over, I walked to the center, going past Herald Square and Macy’s, Penn Station, Madison Square Garden, and large swaths of Manhattan with office buildings. And, interspersed with tourists, people with jobs on their lunch hour, and the normal New York horde, were people in costumes heading west. If anybody but me thought it was odd to see anime characters and guys with capes and masks walking down the street, they kept it to themselves.

From then on, all is a fog. I saw more people I like (including Walter Simonson, whom I might have hugged a little bit too long). I got hit in the face with more backpacks. I ruined more pictures by walking between the photographer and the subjects, because, I’m sorry, but just because you are in costume doesn’t mean you get to take up an entire aisle.

Still, I noticed a few things. It seemed to me that almost half the attendees were female, a huge change since I started going to these things. I don’t know if shows like The Big Bang Theory have reassured girls that they can handle geek culture, or if there are simply more of us out of the closet, but it’s a much better feeling from my first shows, when women would confide in me that they were followed into the bathroom by guys who couldn’t believe they were really girls at such an event.

Perhaps as a result, there were fewer artists in Artists Alley promoting characters with gigantic breasts and other impossible tricks of anatomy. I only remember one, whose super heroine had breasts started just under her clavicle and ended at her armpit. I mean, I like a little uplift, but, you know, ouch.

By the end of the show I sounded like every character in every action movie ever made, muttering “I’m getting too old for this shit.” I’m starting to feel that, as a short older person, I need to be lifted up on a chair and taken around the rooms carried by four shirtless body-builders, like a sultan from a Bob Hope sketch.

Still, I was moved by this story on the Bleeding Cool website, comparing four days at a comics convention to a religious experience. I envy those of you who get to experience this for the first time.

It’s a treasure. Don’t bury it.