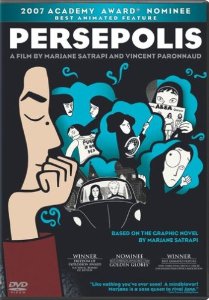 This reminds me to renew my membership in the Comic Book Legal Defense Fund (no, they aren’t called to defend this one, but they do great work both here and abroad):

The trial in Tunisia over the broadcasting the animated Iranian film [[[Persepolis]]] was cut short Thursday after an uproar in the courtroom. Lawyers for the two sides shouted at each other and exchanged insults inside the courtroom, prompting the judge to adjourn the trial until Jan. 23. The controversy over the film illustrates how Tunisia, the country that started the wave of uprisings that have swept through the Arab world this year, is struggling to work out the role of Islam in society after years of officially enforced secularism.The privately owned Nessma television station provoked an angry reaction last month when it broadcast a dubbed version of Iranian director Marjane Satrapi’s award-winning adaptation of her graphic novels about growing up during Iran’s 1979 Islamic Revolution.The film, which won the jury prize at the 2007 Cannes Film Festival, contains a scene showing a character representing God. Depictions of God are considered sacrilege in Islam.

via Uproar at Tunisian trial on Persepolis showing – Yahoo! News.