ComicPress Migrates from .org to .net; Frumph Takes Over, Releases 2.9.2.27 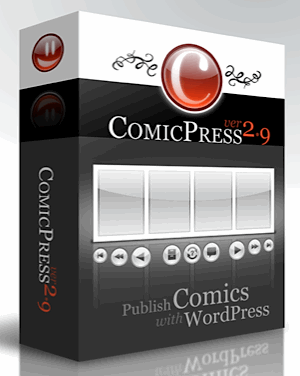 ComicPress, the beloved plug-in that turns WordPress into a webcomic platform used by an estimated 25% of webcomics producers including PVP, Least I Could Do, FoxTrot, The Dreamland Chronicles, and The Webcomic Factory, has been taken over by longtime code developer Philip M. Hofer, known to the webcomics community as “Frumph”, and he’s marked the occasion with a new improved release. Quoting from the new home for ComicPress at ComicPress.net:

As everyone knows; I’ve taken over ComicPress’s development for
several years now (sorta) as a group with the others then when they
bowed out kept it going because end-users use ComicPress.

Unfortunately any donations that people have given for the
developement of ComicPress and it’s usage has not gone to me. The
donation button on the ComicPress.org site goes to Tyler Martin. Which
in all reality it should. However, it’s come to the point where Tyler
is MIA in development and hasn’t included himself in anything since
2.8.0.r5 was released.

I personally have nothing against Tyler, I dig the lug and hope whatever he’s doing is awesomesauce.

For the last year I have been trying to get out of developing
ComicPress for several reasons, one of them is my health. Two times
this year I have been to the point where I wouldn’t think I would see
the next day, both times I have been blessed to recover nicely. The
other reason is financial. Medical bills, living, a son that eats like
a racehorse and a never ending multitude of fiasco’s involving a lemon
of a car I bought. Lastly, I really like you guys (and girls – rawr)
and feel that keeping ComicPress updated makes a real difference to
you, that you have a viable means to show your art and story on the web.
Ultimately I guess it’s a deep sadness that all the times that people
have “appreciated” my efforts and assistance in helping you and them
with your site is not specifically going towards me; to this I mean the
donations on the ComicPress.org site. I do not and have not received
any donations from that, minus one time where in the notes it
specifically put my name in it.

At one point in time I was considering making a ‘premium’ theme so that I
can get out of the financial hole that I am in. Some great people
responded with positive remarks towards wanting to have a great product
available that justifies a price tag on it. Others, who are vocal and
rude seemed to think it was more proper to think that life is free and
shut that idea down with a big obnoxious hurtful drama.

It’s difficult sometimes to want to do things for people just out of
sheer will to ‘want’ to be involved and helpful when the comic community
members retaliate with spiteful remarks; so it was my decision to not
make a premium theme. Unfortunately for the community I removed those
very awesome things that made the premium theme awesome from ComicPress.

What I’m still doing with ComicPress and news on Comic Easel:

ComicPress surfaced in November of 2005 when Tyler Martin took an interest in the quickly
advancing WordPress blogging software and developed a theme for it to
publish comics that would become the ComicPress publishing platform.
Several developers contributed various amounts of code to the
project and ComicPress would soon become an industry standard for
publishing comics on the Web.
In May of 2008, programmer John Bintz developed the ComicPress
Manger Plugin to accompany the theme and automate many of the tasks in
managing a comic as well as taking on the task of further developing the
functions.
In July of 2009, programmer Philip Hofer, well-known to the
Webcomics community as Frumph, joined the development team to assist
with code development and help blow out the features list for the much
anticipated version 2.8 of the theme.

Phil is a great guy who’s been working like an S.O.B. to make great sites for lots of people, and he deserves your support.