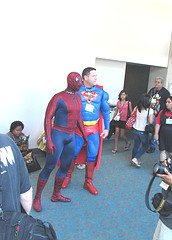 Sometime in the late 1970s, there was a show in New York where DC Comics actually had a booth and I got to wander over as a fan and chat casually with president Sol Harrison. It was the earliest memory I had of a publishing taking booth space on the convention floor. Before then, the tables were given over to fanzine vendors, back issue and new release dealers and that was about it. Little in the way or merchandise and even less original art was being sold.

Fans and creators could mix in the aisles, chat in the lobby, and talk before and after panels. It was a far smaller, more collegial atmosphere and certainly formed relationships with people I still have today.

By the time I joined staff at DC in 1984, the major publishers had been taking booth space with increasing regularity at shows from coast to coast. These were standard trade show booth designs that were decorated with the company’s wares, maybe a TV monitor with a video tape playing but that was about it. Editors and creators sat at tables and signed comics, did sketches, and handed out sampler comics or buttons.

During the 1980s, things continued to grow and more customized booth set-ups were showing up but fans could still walk into a publisher’s booth and talk to editors and talent. That began to change in 1992-1993 when Image arrived with show biz razzle dazzle and DC, flush with Death of Superman profits, gave us a mammoth booth dubbed Wayne’s World, nicknamed after Bob Wayne. Since nature abhors a vacuum, this new space filled with a growing number of fans, but patient ones could still talk to staff and freelancers.

2001, the year I ran cons as part of my Marvel portfolio, we had a multi-story structure that was trotted out to the biggest of shows, from the Licensing Show in NYC to San Diego. We had a minimal staff presence but tons of freelancers and that was the year we had Sam Raimi come and sign trading cards to promote the first Spider-Man film. And that may have been the year we hit the tipping point.

Since then, it has been increasingly more showmanship than actually giving the fans an opportunity to speak with their favorite creators or editors.  I was thinking about this as I wandered last week’s New York Comic-Con. The DC booth was stuffed with displays for DC Direct merchandise and separate tables existed where creators could sign. Every time I wandered through the booth, I rarely saw an editor, who was usually engaged with talent not the fans. At the Marvel booth, creators were off to one side, making way for the mammoth Avengers set recreation. I never did see an editor each time I passed the crowded, noisy expanse.

I think fans miss out by not having those opportunities to meet and chat with the editors behind the books. While they are busy conducting business, the conventions are also opportunities to talk with the readers and get a wider variety of opinions beyond those posted online. They could walk away from the shows with a clearer idea of what the mood of the audience might be.

The smaller, comics-oriented shows such as Emerald City and Baltimore certainly allow more fan to creator engagement but they are also shows not as well supported by the publishers, robbing both editors and fans a chance to interact.