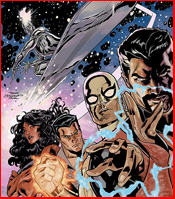 Fickle little bastards that we are, most of the hubbub around the American comics world has been revolving around DC’s New 52. Is it any good? Are any any good? Which ones really suck? Which title has the most breasts? It’s all great publicity in the short term; nobody’s talking about Marvel Comics.

Marvel movies are another matter. But, this week, that would be a digression, even though the first Avengers trailer was just released.

The House of Ideas (anybody remember that catch phrase?) is in the middle of two Big Events – three, if you count whatever the hell is going on with the X-Men titles. They seem to be going through their own new 52. Or perhaps new 104. There’s so many of these books I couldn’t read them all even if I were Pietro Maximov. So, this week, the X-titles are a digression.

I’ll admit I started off liking both the Fear Itself and Spider-Island Big Events. Neither were spectacular, awesome, incredible, nor uncanny, but both were good solid superhero dramas in the Marvel motif. Not everything has to be better than ever and “good solid” is just fine most of the time. I’d say I recall saying that about the second Hulk and second Iron Man movies but I’d be indulging in digression.

But after the passing of a couple months both became a burden. No, I haven’t been reading all of the tie-ins and mini-series and such – Marvel’s been great about maintaining the sidebar nature of these subordinate series. But the cumulative nature of both Events happening simultaneously has worn me down. I’m having a hard time giving a damn, and these books have been sinking down in my reading pile buried under the weight of comics that show more spontaneity and innovation. Few are published by DC or Marvel these days.

Here’s the rub. I still proudly think of myself as a fanboy. I also proudly think of myself as a pain in the ass, but that’s still another digression. Two of my favorite characters are and damn-near have always been Doctor Strange and the Sub-Mariner. I’ve liked the Red She-Hulk stories I’ve read. Now all three of them will be in the new, new Defenders, along with that one-man Greek chorus, the Silver Surfer.

It appears that the new, new Defenders will be an outgrowth from Fear Itself; writer Matt Fraction is a major force behind both. Maybe I’m wrong. Maybe it’s a new event all onto itself. Damn, would that suck. Anyway, I’m reluctant to abandon all this current Marvel Event stuff because these specific characters continue to warm the cockles of my fanboy heart.