PULP ARK, the official New Pulp Convention, debuted in Batesville, Arkansas on May 13-15, 2011.  Due to the initial success of the format and comments made by both guests and attendees, PULP ARK decided to offer its programming, from panels to classrooms to rather unique programming aspects, such as a live action play in the midst of the show, to other Conventions and Shows.  PULP ARK announces that the first convention that will host New Pulp Traveling Con Programming is the Memphis Comic and Fantasy Convention (www.memphiscfc.com) October 14-16, 2011 in Memphis, Tennessee!

This plan, according to Tommy Hancock, PULP ARK Founder and Coordinator was not restricted to Pulp themed shows. “As a matter of fact,” Hancock reports, “the original discussions that prompted this among Pulp Ark guests, many of them creators in both Pulps and Comics as well as other mediums, focused on offering this unique programming to Non Pulp Shows, like Comic and Fantasy conventions, old time radio conventions, genre specific shows, and so on.  So we’re extremely excited to be a part of the Memphis Comic and Fantasy Convention and so far they’re as excited as we are to have us!”

The line up for NEW PULP Programming is a stellar one.  Hancock, listed as PULP GUEST OF HONOR on the con’s site states that the real talent are those who are coming with him.  “Super Hero Pulp author extraordinaire Van Plexico and Author of Pulp Epics Wayne Reinagel will be there to do panels and take part in the programming.  Also, Erwin K. Roberts of Planetary Stories and Pulp Spirit, among others, as well as Don Thomas, author, and Pete Cooper, artist of Pro Se Productions will be there to work their wondrous magic.  This will be a weekend of panels, classrooms, plays, theater, and most of all camaraderie.”

For the schedule of New Pulp Panels as well as all the other goodness that will be at the Memphis Comic and Fantasy Convention, check out the website at www.memphiscfc.com!   Come out and see what NEW PULP has to do with Comics and Fantasy! You might be surprised and actually learn something! 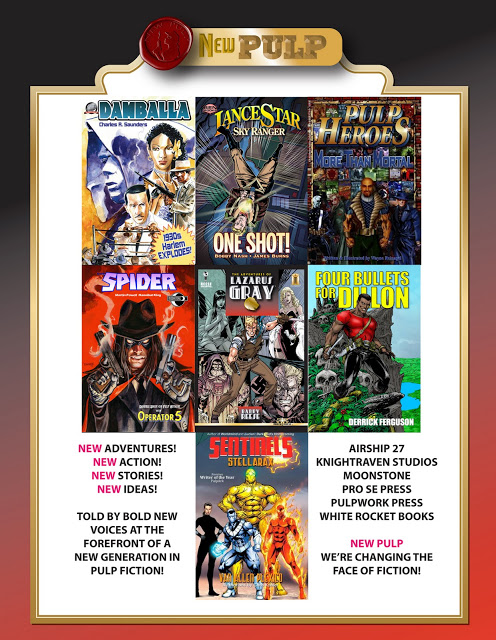