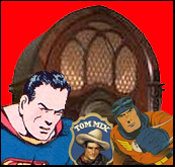 Yeah, that’s him, little Denny, aged six or seven (or maybe even five), dragging the kitchen chair across the linoleum and putting it next to the icebox. He climbs up on it and then he’s close to Mom’s radio. He knows which knobs to turn, he knows how to find what comes from the speaker, what is very important: his programs.

Every weekday afternoon, after school, from 3:30 to six – dinner time, Dad’s nightly return from Work (and work is also very important, though Denny doesn’t know why) – Denny listens to Tom Mix and Superman and Hop Harrigan and Jack Armstrong, the All-American Boy (what other kind of boy could there be?) and what may be his very, very favorite, Captain Midnight. Mom has her programs, too – Ma Perkins and Young Doctor Malone and some others – but Denny thinks they’re no better than okay. But his programs…danger and excitement and air planes and fighting and now and then goofiness: a wonderful world coming from the top of the ice box into Mom’s kitchen and Denny’s mind.

Denny has other things he likes. On Friday night, Mom and Dad let him walk alone to The Pauline Theater to see a cartoon, some previews, and two pictures – usually but not always pictures about cowboys. And there are the comic books, the ones that Dad buys at the little store on Union Avenue along with milk and bread after Sunday Mass, and the ones he gets by trading Dad’s gifts with other kids who also have comics. Sometimes, the same people are in both comics and programs and its fun to hear what Superman sounds like and to see what Captain Midnight looks like.

But comics and picture shows are once-in-a-whiles, and not completely reliable: he didn’t know what comics would be on the Union Avenue rack, and maybe The Pauline would be showing one of his favorites – Tim Holt, Sunset Carson or the King of the Cowboys himself, Roy Rogers (and his golden palomino Trigger and, oh yeah, Dale Evans, the Queen of the West)–or maybe the pictures would be about cowboys or detectives Denny didn’t care for as much, picture-people he might forget about entirely in oh, say, 66 years if he were an old man writing about a child. But he knew when the radio programs would be on and how to find them and that was certainly good, did little Denny.

And that old man…might he be a mostly retired comic book writer, you think? And might he not wonder if the radio broadcasts influenced the work he stumbled into more than the comic books he consumed on the front room floor or the back porch? Because listening to the programs, he had to supply his own imagery, to imagine how the battles were being fought, the planes flown, the horses galloped. He had to puzzle over words and ideas he couldn’t quite understand. The world that came from the radio into Mom’s kitchen became his world.

Then, some 20 years later, in another city, he sat down to write a comic book script…

ADDENDUM: If you enjoy vintage radio drama, or are just curious about it, let me call your attention to the annual Friends of Old-Time Radio convention, to be held this year on October 20, 21, 22 and 23 at the Ramada Plaza in Newark, NY. Email: E-mail: JayHick@aol.com