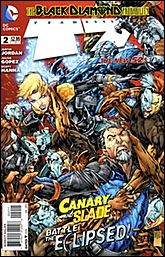 I was considering doing a piece on how I can’t figure out why I haven’t seen any of my comic collector friends on Hoarders. You know, those people who keep moving to cheaper, bigger houses in worse and worse neighborhoods so they can have a living room big enough for those little, narrow walkways among their 437 eight-foot-high stacks of long boxes? Fear of ending up like that is the main reason I never got into collecting. Or so I thought.

But then I looked around my own claustrophobic living space and realized that people who live in Mylar snuggies shouldn’t throw weighted-based maquettes.

But I’m not a collector. I’m an accumulator. I haven’t paid for a comic book in 20 years, but people keep sending them to me. I can’t get them to stop. So I put them aside, saying I’ll get to them eventually. But I hate clutter. So today I finally forced myself to spend the day opening stacks of boxes of comps from the major publishers. And wasting several hours on one of my favorite pastimes (not): cutting open those shrink-wrapped bundles of “floppies” and searching for a cover on which I could tell what was going on without having to stare at it for half an hour.

I’ll award my own personal version of the No Prize (you don’t wanna know) to anyone who can me tell what’s going on here. Or here.

Y’see, I just blew my mortgage payment on a new pair of glasses with lenses thicker than the mirrors on the Hubble, so I know it’s not my eyes.

So engrossed was I in trying to find points of focus and resolving all those hyperthyroidal ink strokes and manic bursts of color into coherent images that I didn’t notice right away that I’d sliced my finger with the box cutter and was bleeding on the comics. In fact, it took a while to notice the flecks of blood on the pages.

No, not because of the gory, violent content (Since when does Superman need to bleed from the nose? Oops, better not get myself started. That’s another rant for some other week) … but because the interior pages are even more incomprehensibly busy, busy, busy than the covers, and in this particular book, the digital colorist’s efforts to cram 137 shades of red into a grad in the background of a panel that printed at 3” wide made it impossible to see the blood.

It finally struck me that what has now made most mainstream super hero product unreadable to me is the very same thing that made it impossible for me to get into collecting, but until today I’d never fully made the connection.

For those of us schooled in certain design principles, minimalism and the use of “negative space” is more effective at arresting the eye than throwing in everything including the kitchen sink. Minimalism in composition, at least ‑ such as that employed here. And here. (And if you don’t believe me, consult Alex Toth.

Since the beginning of this industry, up until relatively recently, many comic book artists have had to be forced by knowledgeable art directors and editors to understand that less is more.

And therein lies part of the problem.

Are the art directors and editors asleep at the switch? No, they’re just impotent. What, exactly, editors and art directors are expected to do these days isn’t abundantly clear. But what role could they play that they aren’t playing in preventing the indecipherable train wrecks that are most mainstream super hero comics?

And what if the very survival of the medium depended on their ability to change course? Could they do it? (Hint: I’ll argue that it does, and they can’t.)

Be here for Part II when we dissect these weighty issues (no, not the floppies). And if you’re one of those eyestrain fans who actually enjoys this stuff while sitting cross-legged in a 3-foot-square floor space between stacks of long boxes, and any of this got your knickers in a twist, just wait’ll next week.