Martha Thomases: Not For Kids Anymore 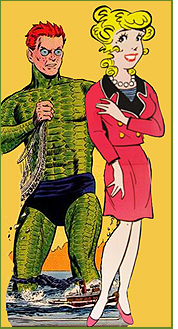 As Blondie says, “Dreaming is free.”

Which is lucky for me, because I have a rather frantic week, and not a lot of original ideas for a column. Sure, I could write about the John Stewart scandal (or non-scandal, depending on which rumor you believe,), but I am late to that party. I could write about some obscure book that deserves more attention, but I am behind in my reading.

My sub-conscious came through for me.

Last night, I had one of my recurring dreams in which I still work for DC. Sometimes in these dreams I no longer work for DC, but sneak into an office and pretend I do. And sometimes, I even wear clothes. I can’t remember which of these scenarios was at play this time, but I remember getting a memo from Jenette Kahn about some new publishing initiative.

In my dream, I ran to my son, the genius writer, about the opportunity this afforded us. We had two ideas worth pursuing.

The first, and more interesting, was a graphic novel about an upper-middle-class teenage white girl in Georgia in the 1980s who is, unbeknownst to her or anyone else, the reincarnation of Mohammed Ali. I don’t think we should let the fact that Ali is still alive get in the way of the fact that this would be awesome.

However, since my subconscious apparently has no literary taste, in my dream I urged we concentrate our attention on an on-going series, The Legion of Jimmy Olsen. It would be like the Legion of Super-Heroes, but set in the present, not the future, and feature all the different characters Jimmy has morphed into over the years. You would have your Turtle Boy, your giant, your caveman Beatle, even your girl.

All at the same time.

I would buy that series in a heartbeat. Wouldn’t you?

The New 52 doesn’t have a lot of Jimmy in it. There isn’t even much Lois Lane. They show up to take pictures or report on some Superman exploit or another, but that’s about it. Grant Morrison had Jimmy doing a bit more, as a friend to Clark.

Even Grant couldn’t work in any Turtle Boy.

As the comics audience has aged, publishers have tried to respond with more mature offerings. They don’t think their readers need a character like Jimmy with whom to identify. Today’s superhero reader, they think, needs stories where the universe is at stake every single issue.

This is a shame, because we could use somewhat less constant cosmic apocalypse, and a bit more whimsy.