If I rebooted Wonder Woman

This is the Wonder Woman I would choose: 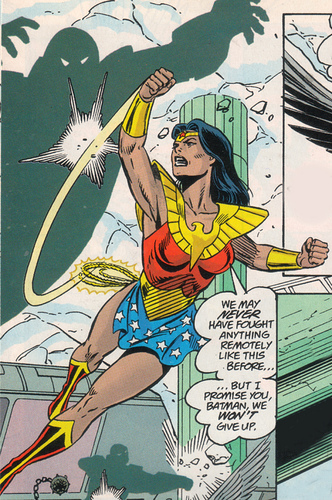 She’s from Legends of the DCU: Crisis on Infinite Earths #1. The designer solved a problem that’s defeated every other attempt to fix her costume: he turned the eagle symbol into something that both holds up her costume and suggests armor.

I dunno who suggested that costume, but I suspect the writer, Marv Wolfman, suggested she look Middle-Eastern. It makes sense. In classical literature, the island of the Amazons has been located in Libya and Asia Minor.

While I like the skirt, I would be tempted to give her pants. And there’s something to be said for a longer skirt like the one she first wore: 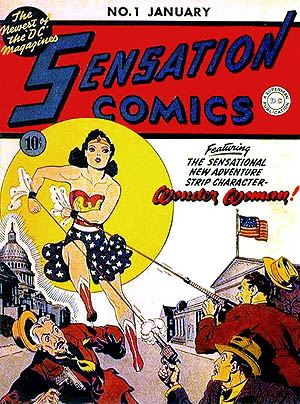 There was an excellent analysis of Wonder Woman, “Wonder Woman, Delineated” at Fractal Hall, a site that’s no longer on the web. The writer proposed:

So, what makes her work?

Factor A is more subtext than explicit, but I think it’s fair to say that any Wonder Woman story has to have a theme of honesty or a counter-theme of dishonesty to it.

Part of what I admired about the Fractal Hall analyses of superheroes was the way they began with the essential differences in genres: Superman is a science fiction character, Wonder Woman is a fantasy character, and the Batman is what they called a crime character, but I would call a mystery character. The worlds of Superman, Batman, and Wonder Woman are so different that they should only meet when the Justice League gathers.