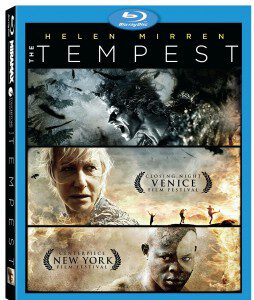 You have to give Julie Taymor credit. She rarely repeats herself and brings a sense of creative vision to every project, making each effort unique. For every brilliant stage work, The Lion King, there is a creative misfire, Spider-Man: Turn off the Dark. And on screen, she scored a bullseye with Across the Universe and disappointed with The Tempest. The adaptation of William Shakespeare’s final play is now out on DVD from Walt Disney Home Entertainment.

The Bard’s works have been interpreted and reinterpreted since they were first staged at the Globe Theater so it’s no surprise Taymor wanted to bring her own ideas to the script. Her bold move was to turn Duke Prospero into Prospera, the duke’s wife and then cast Dame Helen Mirren. Taymor said at the time that no male actor seemed to fit her idea of the lead so tried a woman for a staged reading and decided the story held up.

Translated to the screen, Prospera, the sorceress, presides over the inhabitants on a small island, dealing with her daughter Miranda’s  (Felicity Jones) romance with Ferdinand (Reeve Carney) while fending off the schemes of Caliban (Djimon Hounsou) and Stephano (Alfred Molina) to do her in. There’s magic galore and Ariel, usually played by a female but here is essayed by Ben Whishaw, is a genuine sprite.

The pacing moves along but languidly, as if shooting on a Hawaiian island enervated cast and crew.

The movie performed well at festivals before being met with a collective yawn by critics and audiences alike last December making for a poor year end showing for Taymor. The movie plays much the same way on DVD aided by the usually crisp video transfer from Disney and helped tremendously by some terrific audio work.

Students of Shakespeare will want to see this and own the Blu-ray edition which comes with some terrific special features. In addition to Taymor’s perfunctory commentary, there’s a separate track with Virginia Mason Vaughan (Professor of English at Clark University) and Jonathan Bate (Shakespeare Professor at England’s University of Warwick), using their depth of knowledge to informatively discuss the adaptation. It sounds like an English paper read aloud is quite interesting.

Additionally, there’s the one-hour-six-minute Raising the Tempest which covers the production from script to final editing. There’s always something to learn from these but are really for students of film. This one, though, has Brand offering up comedic patter throughout and makes this worthwhile.

You can watch Julie & Cast: Inside the L.A. Rehearsals, a 14 minute look at Brand, Molina and Hounsou getting a handle on their characters under Taymor’s watchful eye. This is a revealing look at the creative process. There’s an additional, more humorous five minute Russell Brand Rehearsal Riff as he improvises answers as Trinculo to Taymor the Interviewer’s questions. The disc is rounded out with Carney’s “Mistress Mine” music video and an assortment of trailers.