JOSH AITKEN, LETTERER, WRITER OF GLADIATOR FOR RETURN OF THE ORIGINALS, MOONSTONE BOOKS 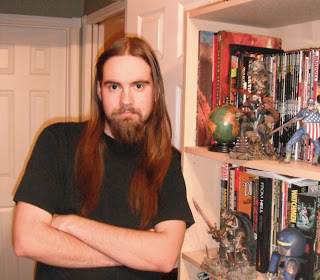 AP:  Josh, thanks for joining ALL PULP on Moonstone Monday! Before we get into the awesome project you’re a part of, tell us something about yourself, both personally and professionally.

JA: Thanks for having me!
I’m a Canuck who went to school for film, television, and radio production, as well as fine art. I play a bunch of instruments, and like to do technical and architectural sketching in my free time. I also design logos for things and companies that don’t exist, or make new ones for famous ones. I like letters; how they interact with each other, different styles and typesets, big bold sound effect ones, and sleek and flowing cursive ones… good thing I’m a letterer, eh?
I’ve been lettering professionally for around five years, as well as running my own graphic design company for around eight. I’ve done lots of work for Moonstone, and have also done work for Shadowline, Ape Entertainment, and most recently Benaroya Publishing, as well as a ton of books that were put out by self-publishers. I’ve also edited a few books, most recently as an assistant editor for Zeros2Heroes Media.
I’m also a strong advocate for Comics in the Classroom. I read Graphic Novels all through high school, receiving top marks for it along the way. Recently my high school English teacher invited me to put a proposal together for a syllabus for integrating Comics into their current curriculum. I’ve had a very busy 2010, but I’m hoping I can take him up on his offer in the coming year.
AP: You’re attached to RETURN OF THE ORIGINALS, Moonstone’s new pulp comic line. Are you a pulp fan? What’s it feel like to be part of such a grand comic experience as this line is shaping up to be?
JA: I’m a huge pulp fan, but, to be honest, I don’t know when it started. I guess it just hit me one day like the butt of a gun in a dark alleyway. It’s probably because I really like all the entertainment put out between the 20’s and the 40’s. I love classic Hollywood films, especially the noir stuff; stuff like “A Touch of Evil” and “Angels With Dirty Faces”. I usually have TCM playing on the TV when I’m working. I love the classic pulp stuff… Phantom, the Shadow, Dick Tracy… and I like the new stuff coming out too. I can easily see the influence in movies like “The Iron Giant” and “Sky Captain and the World of Tomorrow”.
I’m really stoked to be getting the opportunity to add to this project. I can’t wait to see all the stuff we’re going to be putting out. I just finished putting together the handbook for our “new” characters, and we have some really cool toys in this sandbox.
AP: You’re the writer on GLADIATOR for Moonstone’s ORIGINALS line. What is the story behind this comic? Who’s the main character and what are his literary origins? 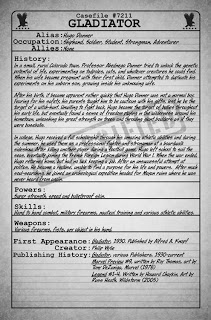 JA: The comic is based upon the short novel by Philip Wylie of the same name, written in 1930. Philip went on to write The Savage Gentleman, quite possibly the inspiration for Doc Savage, and When Worlds Collide, the basis for Flash Gordon. Gladiator tells the story of Hugo Danner, a man genetically modified by his father before he was born, and his constant struggle to live in a society that would never accept his secret.

AP: Working with characters that already exist is an awesome experience, but they also sometimes bring their own sorts of baggage. What from the source material are you planning to keep intact?
JA: Everything. While some people like to adapt a story, picking it apart and choosing bits and pieces they like, I decided to work from the source material, using it as an outline. When Mike and I first started planning this series, we decided that we didn’t want to do an adaptation, or a modern retelling. That’s already been done before.
AP: The GLADIATOR concept has been told and used in a variety of tales over the years, reworked and retooled. What new takes and twists, if any, will you bring to your telling of GLADIATOR?
JA: It’s a great book, but it’s also a really short one. Moonstone’s version will just fill in some of the blanks; flesh it out a bit. For example; my first story takes place during Hugo’s time in the French Foreign Legion. The First World War lasted four years, yet Hugo’s service only lasts a short time in the novel, almost like a summary. Going forward, I’m not planning on writing in chronological order. Since most of my stories will be shorts, I just want to give him some cool adventures that happen “between the pages” as it were.
AP: How is the experience of writing comics different from your other comic work, such as layout and lettering? Is one more fulfilling or exciting than the others?
JA: Writing is totally different than lettering. It’s really apples and oranges. 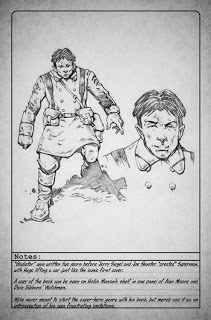 With lettering and design, I feel I use more logical thinking, with a touch of creativity. It’s really about figuring out the flow of the page, where I can place the elements to supplement that flow, and making sure everything is set to be sent to the printer. I am a very analytical thinker, so I think that’s why lettering comes naturally to me. I love puzzles. It can be a real good one to figure out how I’m going to get the balloons to fit in a panel when there isn’t much room to work with. I also have to figure out what font will best represent a sound effect, and what color will compliment it. I also enjoy designing up new caption styles to give a comic a style all its own.

On the other hand, writing for me is more of a demon. I don’t write a lot, and when I do, it’s usually because an idea has been rattling around in my head to the point of causing insomnia, and I’ve got to get it out and onto the page. If I wasn’t writing it down on paper, I’d be writing it all over the walls of my padded cell. I’m always reading magazines, novels, and reference books, and I watch the Discovery and History Channels a ton. When you fill you head with enough stuff, something has to start dripping out of it.
Writing “Gladiator” is also different than my usually writing as I have to consider the source material. Somebody else has already set up the foundation, I just have to make sure I stay true to that. Usually I can just write whatever I want because I’ve got a totally blank page. I welcome the challenge, and know this is going to be a really fun experience. I’m just grateful to Mike and Joe for letting me decide what to put in the speech bubbles for a change.
AP: The main character in GLADIATOR gets a lot of credit for inspiring ideas that we are all familiar with, or at least bearing strong resemblances to well known characters, like Superman or Doc Savage. Do you feel any sort of pressure from those comparisons?
JA: Not really. I read a ton of comics now, but I don’t get awestruck by the weight of a character’s legacy, or the people who work on them. The real pressure is living up to the legacy of the original book and putting out something that pulp fans will enjoy. I know it’s been said before to the point of cliché, but if they like what we’re doing, then it’s all worthwhile.
AP: Do you have anything else in the pipeline for Moonstone or anywhere else, you’d like to let the Pulp world know about?
JA: I’ve got a few comic projects I’m tinkering around with, both at Moonstone and elsewhere. I’m also working on a couple of short films, and those will likely start shooting around 2012. I also have a Phantom story that appears in the back of one of the Phantom: Generations trades. I didn’t think I was going to get a crack at him when I heard that Dynamite was taking over the character, but Joe and Mike allowed me to squeeze one in at the buzzer. Other than that, you’ll see me lettering a bunch of stuff for Moonstone, as well as a couple of other publishers here and there.
AP: Josh, thanks so much and can’t wait to see what you do with GLADIATOR!
JA: Thanks for having me!
Share