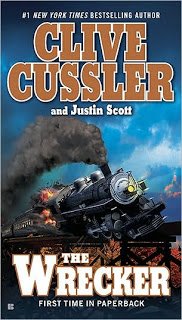 Several years ago best selling writer Clive Cussler created a new turn of the century hero in Isaac Bell, an operative for the Van Dorn Detective Agency in the early 1900s. Bell appeared in Cussler’s excellent novel, “The Chase.” It is the one and only Isaac Bell adventure Cussler has ever written, although there are two more currently on the market with a fourth on the way all bearing his name on the covers. But then again, as most book lovers know, covers do lie.

So here’s more pulp history. Publishers would create characters then hire writers to spin their adventures. Aware their demands for monthly stories would be too much of any one scribe to produce, they would hire several and print their work under a house pseudonym. That’s why all of Walter Gibson’s great Shadow novels were published under the by-line of Maxwell Grant, because he did not write all the Shadow adventures. Likewise, even though Lester Dent did write the majority of Doc Savage tales, he did not write them all. But they were published under the bogus house name of Kenneth Robeson. This was an established practice of the times and as long as their checks didn’t bounce, most pulp writers never quibbled about such aesthetics as fame and glory.

Jump ahead to the early 1980s and this established deceitful tradition was suddenly given a new spin by the publishers’ marketing departments when they realized certain bestselling authors’ names have what is commonly referred in the advertising game as Brand Recognition. That simply means that over a period of time these writers (Stephen King, Dean Koontz, John Grisham, Tom Clancy, Clive Cussler to name a few) have created, via their books, an army of loyal fans numbering in the thousands. Fans who will buy anything with their names on it, regardless of the plots, themes, genres etc. If it says Clive Cussler on the cover, X number of thousands of copies are guaranteed to sell. Thus for Cussler’s publisher the logical next step was to get him to write more books every year to keep those sales coming in on an annual basis. After all the book business is no different than any other, the bottom line isn’t art, its profits.

Unfortunately they soon discovered that poor Cussler didn’t want to be chained to his PC twenty-four hours a day, seven days a week. The guy very much wanted to eat, drink, sleep, spend time with his loved ones and actually have a life. What’s the point of making all this money if he couldn’t have time to enjoy it? Such an awful dilemma to have. So what’s was the solution that placated both the writer and the publisher’s needs at the same? The answer, most likely first originated by some truly ingenious marketing manager, was to use the famous author’s name but hire someone else to do the actual writing. We are not talking about co-writing here, although that is what these money hungry publishers would like you to assume. Oh, no, they went out and hired other writers to take over the series created by the big name authors and then let them write them solo.

Of course not being privy to these inside machinations, we can only speculate. As a reviewer who does enjoy Cussler’s work, I’d like to believe that when he first began whipping up all these spin-off series from his Dirk Pitt books, he did take some time in overseeing the creation of these new concepts and did investigate, as much as time would allow him, who these new writers would be. He may even have contributed an occasional plot or two in the beginning. But that’s it, readers. At present Cussler has his name on a total of five on-going series and the I’m guessing the only one he actually any writing on are the Dirk Pitt books which he now co-authors with his son Dirk Cussler.

The Kurt Austin adventures, the Fargo Adventures, the Oregon Files and now the Isaac Bell adventures are handled entirely by hired guns. If the books are still good, is this a bad thing? Not necessarily. But it remains a deceitful trade practice this reviewer is getting more and more tired of because it does rob the real authors from the full praise they deserve. Thus, I for one, will from this point on list the names of the true writers over those of the “brand name” celebrity. That said, let’s look at “The Wrecker” by Justin Scott.

The year is 1907 and Southern Pacific Railroad is on the verge of completing the last section of its Cascades express line. It is a project the company is heavily invested in and should it fail would mean their ruin. When a brilliant saboteur known as the Wrecker is wreaking havoc and destruction on the line, causing multiple deaths in the process, the company is thrown into turmoil. Finally the president and owner, Osgood Hennessy, hires the famous Van Dorn Detective agency to hunt down Wrecker and bring him to justice before he totally destroys their operations. Because of the prestige status of his client, Joe Van Dorn assigns his best agent, Isaac Bell, to the case and thus the hunt is on.

This book is a fast paced thriller pitting two cunning intellects against each other, with the Wrecker having the advantage as his true identity is unknown to the determined investigator. From one end of the sprawling continent to the other, Bell and the Wrecker play a deadly cat and mouse game like Grandmasters at a chess tournament, each moving his pieces skillfully with deadly intent. Soon both are aware there can only be one victor in this contest; only to who will survive their final conflict. “The Wrecker” is a truly magnificent historical adventure with a relentless pace as speedy as the trains it describes populated by noble heroes and dastardly villains. If you enjoy solid adventure with an authentic historical background, this is one book you do not want to miss. Kudos to Mr.Justin Scott, we can’t wait to read the next book in this entertaining series.