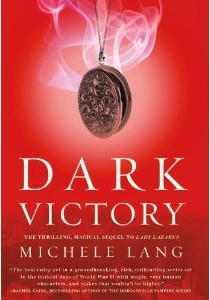 explodes onto the mind’s screen with the second installment, Dark Victory

It picks up where we left off: August 30th, 1939 on the almost-eve of Hilter’s invasion of Poland. Magda is back in Hungary and has captured the dark angel Asmodel, demon-brother of her beloved and once-archangel Raziel (he gave up his immortality to join her fight against the Nazis and make a difference, instead of being a spectator…shades of the Watchmen ethical dilemma of To Do or Not To Do?) She’s pulling out all the stops so that everyone can join forces and maybe, just maybe, thwart her powerful-but-fragile sister Gisele’s dire prophecy of blood and doom for her Jewish people and certain, final death for all, including herself (able to return from the dead, but at terrible cost and with severe limitations). Whatever happens, Magda has to try to protect her precious friends and all she loves, even if it means her own, ultimate damnation (shades of Bleach’s Ichigo, and you can also hear Scarlett O’Hara saying, “I don’t care what it takes…if I have to lie, cheat, steal, or even murder…as God is my witness…”)

Magda is not afraid to get her hands bloody-dirty. A lot. But not without her resources—she is not totally mad! And she has gained respect and even a bit of fear from the witches and vampires and demonnesses upon whom she’s fixed her slightly helter-skelter gaze. After all, she’s died several times and lost almost everything she’s ever loved and has been told she’s going to lose it all and then some, anyway, so what’s she got to lose? Makes her über-ballsy moves seem downright rational, at times. And there are those resources: her taciturn angel-man Raziel (Secrets of God) who is getting used to his human limitations and freedoms, both; the begrudging help of the Zionists and her forever-fierce friend Eva; the loyalty of her embattled vampire-employer, Count Bathory, whom she’d served for ages; those demonnesses, forest spirits, even golems, her own creation from Kabbalah (yes, once again, Lang has done her homework—this stuff is real!), and the arch American bookseller Knox who has leads on her Book of Raziel for which the women of her line had, indeed, sold their souls. But not completely. There is always hope. Even Winston Churchill comes into the picture.

Lang spares no imaginational expense in this second venture of her view of the world on the verge of war and one young woman’s quest to stop the juggernaut of the demon-possessed Hitler’s Reich. The book has a bit of the middle-of-a-trilogy set-up vibe for the Big Finale, but hey, if Tolkien could manage the big pay-off in Return of the King after Two Towers, I have no doubt that Lang can, too. The difference is the internal-external shift in point-of-view between books. Raziel gets more screen time but says and does very little save for at key junctures—he’s big and Present, at Magda’s side vs. his sibling, the silver-tongued and oh-so-deadly Asmodel. Magda is not afraid to use any of the powers she’s being trained in and discovering on-the-fly—crisis is the hothouse of learning, sometimes. The rest of the characters mature in the face of unspeakable odds and reveal key facets of their personalities over the course of this Greek- and Shakespeare-level operatic-style tragedy. Can Lang pull any light out of this darkness? Will anyone be saved, spiritually or physically? Is Magda her own woman or still trying to be mama’s and papa’s little girl?

Perhaps. Can’t wait for book 3 to find out whom and how.