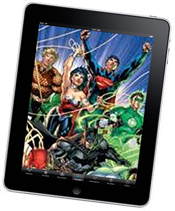 For twenty-five years, Mike Malve down in Arizona ran a successful line of comic book stores called Atomic Comics. I knew him from his weekly e-mail messages that he sent out. Nice chatty e-pistles about what sold last week, what was coming out this week, assorted thoughts about the industry, various promotions he was running, different guests he had visiting and so on.

I’d never been to his stores but Mike and I exchanged several e-mails. He always struck me as a good solid sort of retailer, one who knew and loved the industry, worked hard, promoted the work and those who made it. The sort of guy you wanted to see make it.

Two weeks ago, he closed down all his shops. There were lots of factors contributing to the closings, as he detailed in his last report. When the times were good, he expanded into high profile locations but, as he said, “when the economy went sour, low sales could not support the higher rent at these high visibility locations. The leases at these particular stores which had originally provided the consumers with greater visibility and more foot traffic to our wonderful world of comic books, the higher overhead proved to be too much for Atomic as we faced declining sales.”

He traces the decline back to an incident in 2006 when a 16-year old uninsured driver crashed her car through the front window of his biggest store and best revenue producer. The accident tore up a water main and the flood caused a million dollars worth of lost revenue and the store closed down for over five months. This was just as the recession started.

Mike secured the leases on the stores with his house so he’s going to be losing that as well as going into bankruptcy. Throughout it all, he’s maintained as cheerful and upbeat an attitude as he can manage – better than I could in his circumstances. He hopes to find some way to remain in the industry he loves.

Just two weeks later, this last week, DC launched its latest version of its titles in a sweeping revamp that includes same-day digital sales. At the same time, we see Borders closing its doors and various and sundry people have announced the death knell of the brick and mortar bookstores of all stripes.

I hope it isn’t. I think not for the same reason that I prefer reading my printed newspaper rather than one on computer or a tablet. Reading comics, reading books, reading magazines, reading newspaper electronically isn’t the same experience as reading them physically. People thought TV would kill radio but it survived and morphed into something different – a different experience. DVDs and Blu-Ray supposedly would kill off going to the movies but sitting in a theater is a different experience than just sitting in your home watching. That’s what comic book retailers have to sell to their customers – the experience of coming to the store as opposed to ordering or reading comics online.

Once, when I was in Chicago, I saw they had opened a place that was a Laundromat on one side and a bar on the other, both catering to a clientele in their twenties and early thirties. I don’t know if it’s still there but I thought it was a brilliant idea. I love mashing ideas together; GrimJack was originally a mash-up between two genres – sword and sorcery and hard boiled detective. My upcoming new Star Wars series, Agent of the Empire, is a mash up of James Bond style spy stories and, of course, Star Wars. The way to make it work is to think of what works well together; peanut butter and jelly works brilliantly together although they are very different things. Peanut butter and anchovies? Eh, you could but why?

Maybe that’s the key for the survival of the brick and mortar stores – adapt and change. Mike talks about reading the book by CEO of Starbucks and being inspired by it. Maybe that’s an idea – put a Starbucks in the corner of a comic book store. They seem to have them everywhere else!

I wish Mike the very best as he seeks to regroup. I think he’s experienced, enthusiastic, and knowledgeable and I would hope there is a place in the industry for people like that. (I’d better hope that, since that’s also me!) The fact that he didn’t make it bothers me enormously – if a smart, capable, savvy retailer can’t make it, then I’m worried about what that says about our industry. I love retailers; they’ve made it possible for me to make a living at what I do. I want them to make a living at what they do. This is not a good place and time for small businesses, however.

I’m not a fan of change at this point of my life; too many changes in my life that aren’t necessarily for the better. Making me a grumpy old fart, yessir! But if Mike Malve can face change and remain optimistic, I guess I can, too. Who knows? Maybe peanut butter and anchovies can be made to work.