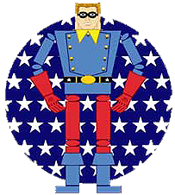 So, there I was, doing what I suppose I do far too often… scouring Facebook for status updates. A quick refresh, and there was an update from a friend saying how “This is not my Bucky Barnes.” He was referencing a purchase he’d recently made of a golden age Bucky figure, and how he hated the new Winter Soldier-era Barnes figure. Suffice to say, after seeing his umpteenth remark how a modern interpretation of one of the classic comic book heroes he loved so dearly rubs his rhubarb the wrong way, I had enough.

Call it being cantankerous in my own “Hey, I know you think I’m too young to form a real opinion, but screw you, I can anyways” way… but I’d like to say that this kind of general malaise towards interpretation and experimentation grinds my gears to a screeching halt. In short? Quit your bitchin’ gramps. It’s 2011. Your childhood memories remain intact, in spite of your fear that they won’t.

It’s this common thread amongst the older comic book fans that I truly find offensive. Maybe that’s not the right word. I’m not implying it’s anyone here on ComicMix mind you, but the conglomerate of silver/golden-age dick-chuggers who poop their pampers anytime anything changes in the fictitious worlds of their youth, drags us all down. We’re all entitled to our opinion, mind you, and I don’t deny anyone their right to express that opinion. See folks, I’m young, under-appreciated, and don’t know shit-about-nothing; But I’m taking this time to start a large debate. Mind you no one will answer my call, but I’ve never not had fun at screaming into the black abyss of the internet before.

This notion, that the creators of today can’t reinterpret a character because it’s not their version of the character, is a waste of breath. Ed Brubaker’s retcon of Bucky Barnes as the Winter Soldier was an amazing feat. He took a character that was long gone, and brought him back in a story that got real attention from new fans. Here was this relic of another era, repurposed for modern times, done with a deft hand. His origin remained intact. He never took away from the character who he was. Yes, he turned a once chipper, bright-eyed innocent kid (who had no problem murdering Nazis with guns) into a cold and ruthless killer.

On the surface, that sounds like a perfectly good point to raise when poo-pooing the concept. The Winter Solder is decidedly not the Bucky Barnes of WWII. But he doesn’t have to be. The fans took to the character quite well, and when he eventually took the mantle of Captain America from the then-gone-by-way-of-time-bullet Steve Rogers… It resonated with fans. He wasn’t Steve Rogers. He carried a pistol. His uniform was decidedly darker and more realistic. And for a certain swatch of cranky geezers? It was a tarnish on the sheen that was their childhood. What they don’t realize about this, and so many other wee changes over time… they’re changes for the better of the medium.
Should everything in comics remain as they once were? Hell no! I could take up the remainder of this column waxing poetic on how many amazing updates were given to tired old concepts in comic books. Turns that resonated with new fans, which we all can agree are what the publishers really want to sell their wares to. Kyle Rayner instead of Hal Jordan? In a heartbeat. Wally West instead of Barry Allen? Anytime, any place. Ben Reilly instead of Peter Parker? OK, you can’t win them all. But you get my point.

When it comes to grabbing the all-important new wave of fans, comic companies hurl everything but the kitchen sink at the ceiling to see what sticks. As a fan, I’ve had to watch Superman Blue and Red, John Paul Valley as Batman, and yes, the Iron Spider. They don’t hit them out of the park every time. But to whine, bitch, and moan whenever it’s done? Give it up. If characters stayed the same, mainstream comics would be dead. Without the balls to experiment, we would not have Barbara Gordon as Oracle. We would not have Scott Snyder’s brilliant run on Detective Comics, featuring Dick Grayson as Batman. We would not have Grant Morrison’s amazing run on X-Men. Change breeds new concepts and better books. If you don’t believe me, take it up with Alan Moore.

Perhaps the biggest argument from the opposition lay with the corruption of innocence. I get that. I even respect that. The day someone remakes the Wizard of Oz with a Tin Man wielding a tommy gun, I’ll probably raise a big stinky-stink over it. To borrow from another medium though, when Metallica covered Bob Seger, it didn’t make the original song vanish. And, as terrible as it is to say, I love Metallica’s “Turn the Page” 100 times more than Seger’s. Heresy? Sacrilege? Hardly. Their version of the song spoke to me at the time. It doesn’t make me wrong to like it. It simply means I was the audience to that product. The same can be said about all the changes to our favorite characters over the years.

Everything is cyclical. The darker turns of comic books (be it Watchmen, Frank Miller’s Batman, The Ultimates, et al) only foreshadows an eventual 180. In pro-wrestling, they call this a face-turn. Just because you update a character’s costume, or you add a gun, that doesn’t mean you’ve erased the past. You’ve only just tried to interpret him or her into someone that might be more appealing to a new audience. If you’re not in that audience… Feel free to continue living life elsewhere. No one will come into your home and burn your longboxes. If a book sold well without ever updating, Batman would still carry a gun, and Superman wouldn’t be able to fly.

The best part about this world of fiction we all enjoy is that the characters therein aren’t made in an impenetrable vacuum. At their core, they are the same as they ever were. All the stories, costumes, updates, ret-cons, star-wipes, and Elseworlds are just window dressing. To belittle the creators for trying something new, is to damn the medium to not grow with the times. At the end of the day, it’s all dollars and cents. Even if it doesn’t make sense to you.

We all hold those few precious memories, items, characters, etc. that touched us as kids, very close to our hearts. There is a legitimate fear that some new boy or girl won’t experience that character as you have. The trick is though, knowing that if it touches them in any way… it doesn’t matter if it’s yours or not. I won’t lie. There’s been updates a plenty that I found repulsive. The Green Lantern movie? I’d sooner watch paint dry. Spider-Man’s organic web-shooters? Terrible. Hell, I’m not even a fan of the unparalyzing of Barbara Gordon (just yet). But never will you hear me shout “That’s not my Batgirl.” Because, she was never mine to have.