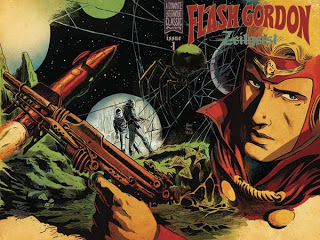 August 25th, 2011 – Runnemede, NJ – The iconic legend Flash Gordon is making his dynamic splash back into comics with Dynamite Entertainment this November!

As Flash Gordon’s story begins, it is a time of two-fisted swashbuckling, of fearsome threats and wild adventure-and of ever-growing threats on the horizon. Three valiant humans — Flash Gordon, Dale Arden and Dr. Hans Zarkov — are plucked from the Earth, traveling to the distant planet Mongo. Their exploits are legendary, battling the machinations and terror schemes of the dreaded emperor Ming, the All-Seeing Ruler of Mongo. But they did not fight alone! And coming up, witness a startling meeting with Ming the Merciless! With the fate of our world helpless, can even Flash Gordon save us?

Alex Ross had this to say about Flash Gordon – Zeitgeist, “Finally, after all this time, I’m working on a Flash Gordon series that brings the best I have to contribute to this legendary character and forerunner of all comic books!”

“I couldn’t be happier about this project,” stated writer Eric Trautmann. “It is a genuine treat to be able to let my inner ‘pulpster’ out, and write in an idiom I rarely get to play in, which has a rich core of optimism and innocence. We’re very much approaching the comic as if it were the Flash Gordon movie we’d all want to see. Add to that, I’ve adored Flash Gordon for as long as I’ve been reading, and the opportunity to play with Alex Raymond’s material — in a way I don’t think has been done before — is truly exciting. The Raymond strips were just so plot-dense, with a sense of ‘anything goes’ that I look for — often unsuccessfully — in contemporary comics. And, of course, several times a week, I check my e-mail, and find a dozen amazing pieces of artwork from Alex Ross; I’d be hard-pressed to find someone who has a greater understanding of the characters, or who harbors more affection for them, than Alex. He has laser-like clarity about the look and feel of the characters, the setting, the story, technology, making it all look new, and at the same time quite familiar. He’s an exceptional ‘vision holder’ for our tale.”

“Dynamite has added another classic character to our growing library of comics,” says Dynamite Entertainment President and Publisher Nick Barrucci. “Eric has put together an amazing story and all Flash Gordon fans will fall in love with this book, just as I have!”