MINDY NEWELL: The Real Origin of “I… Vampire” And Other Bits And Pieces 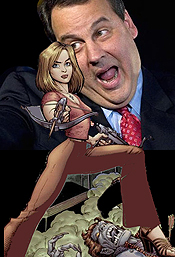 Just a quick little column this week, guys, just a collection of my thoughts. Some about comics, some not. Call it a walk into Mindy’s brain. And don’t forget to duck.

• Spent three hours today at the New Jersey Division of Motor Vehicles renewing my license. Last time I renewed it, I was in and out in 20 minutes. Why did it take so long? Two words: Walking Beachball.  (Actually I was going to say Fat Fuck, but I didn’t want to offend anybody.) That’s right, I’m talking about New Jersey’s Governor Chris Christie. For a while at the DMV I occupied myself looking at the latest IKEA catalogue. Then I started talking to some of the nice people who work there. (Now that’s a job in hell! Compared to working at the DMV, Buffy’s stint at the Doublemeat Palace was being the Queen of England.) One of the first things Christie did when he took office was to cut the budget of the DMV, meaning layoffs and location closings and cutting the days and hours the DMV is open and absolutely no updates in computer software. I also talked to some of the nice people who were also waiting at the DMV. Apparently nobody voted for him. In fact, nobody I know voted for him. Even my friends who are Republicans. So how did the Walking Beachball become governor? I don’t know.

• I really hated Season 8 of Buffy The Vampire Slayer (Dark Horse by way of Joss Whedon). Hated. Loathed. I mean, I’m not a big fan of comic adaptations of television and movies to begin with, but this one really sucked. The artwork sucked. The story sucked. The ending sucked. And I put Season 9 on my list at my local comics shop. Fuck it. I’m a Buffy junkie.

• Hollywood speaks, New York City kowtows. Resetting Spider-Man was stupid. Erasing Peter and MJ was stupid. You want to match the Spidey comics with the new Spider-Man movie? Fine. Start a new comic reflecting that reality. Don’t chase away loyal readers by negating everything they loved about the book.

• Hollywood speaks, New York City kowtows. Changing Superman’s costume is stupid. And it’s ugly. You want to match the Superman comics with the upcoming Superman movie? Fine. Start a new comic reflecting that reality. (Okay, I have no proof that is what happened, but wait and see. If I’m wrong, I’ll apologize and retract.) Who was the schmuck who thought up the DC rewind, or whatever the hell they’re calling it? Breaking up Lois and Clark/Superman is stupid. Lois’s new boyfriend is ugly.  Kal-El is waaaay more handsome than this guy is. Changing Wonder Woman’s costume was especially stupid, as the TV pilot wasn’t even picked up when the change occurred. Changing Wonder Woman’s origins was stupid. Kicking Gail Simone off the book so some TV writer who wrote Babylon Five and a certain webhead could take over and write stupid stories was not only stupid, it was insulting and rude and anything but empowering to women. I betcha DC lost a lot of readers and money on Wonder Woman (and that’s not a book that can afford to lose readers and money). Serves them right.

• I did something I never did before: I actually called the White House during the debt-ceiling crisis (which I hope you know was total bullshit) and let Obama have it. Well, okay, I let the White House voicemail have it, but after Obama put Medicare, Medicaid, and Social Security on the table, I had it, so I picked up the phone. I was very polite, said that I voted him and respected him and then I said, “Mr. President, Are You Out Of Your Mind?!” Yep, I really said that. “The Republicans hate you. Mitch McConnell said on the day you were elected that the next four years is going to be all about stopping you and making sure you’re a one-term President. Mr. President, these guys don’t want to work with you. The only black man in the White House they want is the butler or the valet or the security guard. Mr. President, YOU are the President. You don’t negotiate with them, they negotiate with you.  Mr. President, you need to be more like Harry Truman. Remember him? The buck stops here, Mr. President. Okay, that’s all I wanted to say. Thanks, Mr. President, and stay strong!!!”

• My daughter Alixandra is getting married in November. Seems like just yesterday she was four years old and I was taking her to the DC offices with me. Julie Schwartz used to give her this pink candy that he kept in a jar in his office. When Julie died, Alixandra said, “I remember him. He used to give me this pink candy when you took me into the office.”

• The amazing, small world of the comics industry. I reconnected on Facebook with Andrew Bennett. He’s an old friend from sleep-away camp – Camp Monroe. Any of you guys Camp Monroe alumni? There’re lots of ‘em out there! Anyway, Andy finds out I wrote comics, and mentioned that one of his best friends who lived across the street from him in Brooklyn when they were growing up became a comics writer. I said, who? He said Mark DeMatteis.  I said I know Mark. He said, Mark introduced me to my first serious girlfriend, I think she works in comics, too, her name is Karen Berger, you know her, ever hear of her? I said – please use classic New York Jewish accent here – “Do I know Karen?????”

• I’ve always said the Tea Baggers were bigots and religious fanatics. Today the New York Times ran an op-ed piece headlined “Crashing the Tea Party” by David Campbell, an associate professor of political science at Notre Dame, and Robert D. Putnam, a professor of public policy at Harvard. They are the authors of American Grace: How Religion Divides and Unites Us. Beginning in 2006 they “interviewed a representative sample of 3,000 Americans as part of their continuing research into national political attitudes, and we returned to interview many of the same people again this summer. As a result, we can look at what people told us, long before there was a Tea Party, to predict who would become a Tea Party supporter five years later.” It’s a fascinating article.

See ya next week!