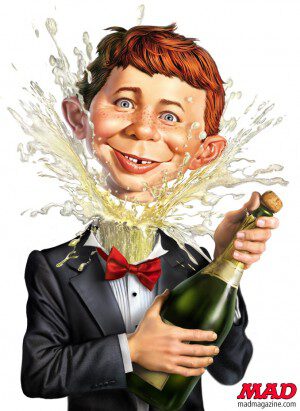 Hard to believe it, but Alfred E. Neuman is celebrating his 56th birthday today.  Ever since he first graced the cover of MAD #30 in 1956, he has become a national icon and symbol of that era. His enduring gap-toothed grin has become an internationally recognized image and has been imitated time and again.

We salute, Alfred and share with you some fun facts about the fellow:

Although Alfred has appeared on the front of most issues of MAD, he has not appeared on every cover.

Over the years, Alfred has been depicted in a wide variety of roles, including Uncle Sam, George Washington, Barack Obama, Rosemary’s baby, Michael Jackson, Justin Bieber and Batman.

Alfred’s signature slogan, “What – me worry?” exemplifies the satirical and care-free tone of the magazine.

Alfred has run for president every election since 1956 with the campaign motto, “You could do worse, and always have!”

Alfred’s eyes are not aligned straight, yet they always manage to make contact with the reader. He is never depicted in profile.

In 1983, a man wore an Alfred E. Neuman mask while attempting to hold up a gas station in Michigan. The attendant working at the station could not take the man seriously and the robber left the scene without any money.

In MAD #322 (October, 1993), the magazine asked readers which real life celebrity Alfred E. Neuman most closely resembled – David Letterman, Ted Koppel or Prince Charles of England. While TV personality Letterman was leading the vote for the majority of the polling period, a last-minute influx of votes from Canadian readers crowned Prince Charles the victor of the competition. This was ironic considering that in 1958, MAD received a letter from Buckingham Palace (reprinted in MAD #48) to shoot down comparisons between Charles and Alfred. To this day, nobody knows if the note in fact came from Prince Charles himself.

As MAD’s mascot, Alfred is often referred to by the Usual Gang of Idiots at MAD as the magazine’s “Playboy rabbit.”