One of the joys of the Warner Archive program is that movies and television shows for small groups of fans can be released. The restoration costs seem to have reached a reasonable scale and these direct-to-order projects don’t really require the bells and whistles higher profile releases deserve. As a result, we can revel in the stuff we grew up or recall fondly. In my case, that includes a ton of Hanna-Barbera and Ruby-Spears stuff that has been coming out over the last year or two. It also meant I finally got a good copy of the pilot to the Search series.

And while some will turn their noses up to those offerings, they may begin salivating at some of the others that have been released; titles which I personally find not worth our time and attention. One such series is the short-lived NBC clunker Man from Atlantis, best known as the vehicle that gave the world Patrick Duffy pre-Dallas. The premise is certain high concept enough to have been interesting: amnesiac Mark Harris displayed the ability to breathe underwater and withstand the crushing deep sea water pressure. His origins remained murky but as was the formula from the 1970s, he was immediately set up with a purpose that served others rather than himself: working for the Foundation for Oceanic Research, a front for top secret activity. He was accompanied by a team of humans (co-stars Belinda J. Montgomery and Alan Fudge) aboard the high-tech sub called the Cetacean. And rather than delve into her personality or explore the things that made him unique, he became another handsome, shirtless hunk who went through the motions.

NBC’s Fred Silverman green lit the series, first as a number of telefilms, running four during the 1976-1977 television season and these are collected in the just-released two-disc Man from Atlantis: The Complete TV Movies Collection.

The concept proved durable enough it was given a weekly series order and those 13 episodes have also been collected and released as a four-disc Man from Atlantis: The Complete Television Series. I should stress, the pilot film was previously released on its own. 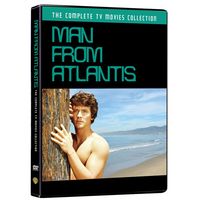 They do not age terribly well although Duffy still looks buff and I still adore Victor Buono’s turn as the recurring nemesis, Mr. Schubert. The show was certainly done on a budget, leaving plenty of money for underwater photography and not much for imaginative scripts. I will give props to Gene Warren and his team for the nice miniature work on the Cetacean.

The telefilms don’t take full advantage of the extra running time (as NBC did with their concurrent Mystery Movies) but we did enjoy having Kenneth Tigar in the latter three installments as Dr. Miller Simon, M.D., who also worked for the agency. When the series moved to a weekly slot, they dropped Tigar and added Richard Laurance Williams, J. Victor Lopez, Jean Marie Hon, and Anson Downes to man the sub and none of them got past two-dimensional personalities.

The show introduced fantastic elements as the magical Imp and the siren-like Mermaid or Jake Muldoon, and his two-headed giant sea monster, called Oscar, but then did nothing interesting with them. They send him through time, they turn his pal into a temporary Jekyll/Hyde mess and continue to recycle hackneyed concepts with little interesting done.

My pal, the novelist Lee Goldberg, noted, “The only thing of redeeming value about The Man From Atlantis is Fred Karlin’s fantastic score.” At least the spent the money on something worthwhile.

The transfers are clean enough so if you loved this show as a kid, it’s here for the watching. Me, I’ll wait for the full series of Search to arrive (as has been promised).