Review: ‘The Man from Atlantis’ 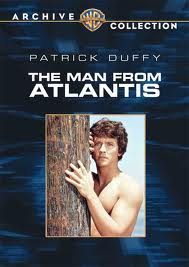 In the 1970s, NBC was the network you could turn to when seeking high concepts series that never lived up to the expectations of its audience. A perfect example was Man from Atlantis, a short-lived concept about a man who could live under the sea.

One of the interesting conventions of the time was that concepts would be allowed to grow and develop through telefilms before a show went to series. In this case, there were four such films produced for the 1976-1977 season before the strong ratings convinced the Peacock Network to let this go to a weekly series. When it arrived in fall 1977, the demands of producing 22 episodes proved too much and the show was weakened, the ratings fell and the series became a footnote; another wreck during the network’s decline (Supertrain anyone?).

Warner Archive has recently released the pilot film on DVD and it’s interesting to see what could have been. Patrick Duffy, in his pre-Dallas days, played amnesiac Mark Harris who displayed the ability to breathe underwater and withstand the crushing deep sea water pressure. The producers extrapolated that he would need webbed hands and feet and the deep sea environment would mean he would have super-human strength out of the water. Found by the government, Harris is asked to work for the Foundation for Oceanic Research, a front for top secret activity. He is accompanied by a team of humans (co-stars Belinda J. Montgomery and Alan Fudge) aboard the high-tech sub called the Cetacean.

The real delight in the show is Victor Buono, the rotund character actor ComicMix fans recall as King Tut, but was a mainstay on prime time for years. His Mr. Schubert, the series’ antagonist, was a charismatic villain. (About the only episode I ever liked was the one that displayed Schubert flat broke after all his previous schemes failed; I had never seen a villain displayed in this way before.)

The pilot’s pacing is slow and everything has to be spelled out for the audience, a common downfall to debut episodes. The 96 minute running time should have allowed more interesting character development but such was not the expectation of science fiction shows of that decade. Duffy was fine as Harris, a bit dull for a hero, but he swam really well.

Marvel did far more interesting stories in their short-lived comic adaptation and the series remains popular with some fans so if you’re curious, this is a fine way to sample the show for yourself.