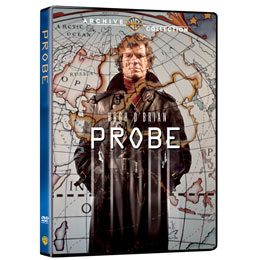 In the fall of 1972, I was 14 and consuming as much science fiction and heroic fantasy as I could mainline. As a result, I was the prime candidate to fall in love with a television series that had great concepts, an appealing cast and plenty of action. None were more disappointed when the series, Search, faded after a single season. Thanks to the Wayback Machine that is Warner Archive, the pilot film, Probe, is currently available with hints that the series itself may follow.

Billed as “science fiction in today’s world”, NBC offered up a series that may be a little creaky upon watching today but the series offered some forward looking thinking that was all too rare during the 1970s. It all began with a two-hour telefilm that served as a pilot from Outer Limits creator Leslie Stevens. Producing the show was Star Trek veteran Robert Justman which may well explain why so many of the sound effects at Probe Control remind you of the Enterprise bridge.

World Securities Corp. was a nondescript business but within its office building lay the ultra-high-tech, secret Probe division. The field agents were outfitted with neural earjacks and dental implants that were wirelessly connected to the control room. Each agent carried a scanner that could transmit audio, video, infrared, medical telemetry and the like. Worn as a ring, cufflink or medallion, it was the ultimate fashion accessory. At Probe Control, a quintet of operatives monitored incoming and outgoing data, the physical health of the agent or the target, and could call up information from international databases. Orchestrating the flow and playing Jiminy Cricket to the field operatives was the no-nonsense VCR Cameron.

Hugh O’Brien, last seen weekly as Wyatt Earp, was cast as the slick, inventive Probe One, Hugh Lockwood. His craggy good looks lent gravitas to the fashionable agent who was a cross between James Bond and Matt Helm. Attempting to hem him in and keep him on task was the cautious Cameron played with ease by Burgess Meredith. The Probe Control staff was filled with young attractive actors at the beginning of their careers including A. Martinez, Byron Chung, Angel Tompkins, and when the pilot went to series, a very young Cheryl Ladd.

The pilot story involved missing Nazi jewels that took Probe One to Europe and some exotic looking sights (courtesy of the Hollywood backlots). There were mysterious men, amorous women, secrets and caption galore in a supporting cast led by Elke Summer and Sir John Gielgud. Some of it was predictable and compared with today’s television it feels a little slow, but the possibilities remain evident. It showed the possibilities of accessing the world’s information and implanting technology within people, moral issues that the times didn’t explore. Today, the size of the scanner might be laughable along with the use of cassettes for displaying data but extrapolate the tech for today, and it still holds up as a series premise.

After many years of hoping, Search fans (including Trek graphic designer Michael Okuda and yours truly) were rewarded with this DVD, which has the cleanest print of the pilot ever commercially released, complete with the bumpers and Dominic Frontiere’s memorable score.  Apparently a complete overseas print was located and used and for that we’re all thankful.  The folk over at the Yahoo Probe group agree with me that this is a wonderful  edition and worth having.