Dennis O’Neil: Who Are You? 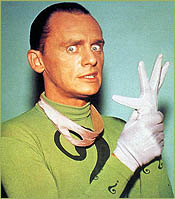 You don’t exist. So I can advise or even scold you without worrying that something I say will, down the line, cause you to hide behind a therapist’s couch and whimper. (Yeah, I know that the Bhagavad Gita tells us that we have no control over the outcome of our actions. Stop showing off!)

You don’t know who you are? Okay, I’ll tell you. You’re a young comics artist (albeit a wholly imaginary one) and you’re trying to make your way – that is, get work. We’ve all been there. And someone has told you that you must establish your “brand” and you guess that this means you should make many people – hordes! armies! – aware of your existence and of the kind of work you do well. (Who’s your idol? Kirby? Kelly? Adams? Who would you pray to if you believed in prayer?) So, you suppose, you’ve got to get out there, raise your head above the foxhole (where, trust me, someone will shoot at it), clamor, shout, even grandstand like Tom Sawyer walking that fence for an admiring Becky Thatcher.

Since we can assume that you can’t afford television advertising, full page ads in the New York Times, or a great big billboard smack dab in the middle of town, you’ve got to work the internet, Get busy tweeting, Facebooking, all that cyberstuff.

But be aware that there’s a downside, here. No, not the cyberstuffing per se. Though I find such behavior slightly distasteful, believing, like other greybeards, that a gentleman does not call attention to either himself or, especially, his achievements, there is considerable precedent for tooting one’s own horn in the arts. I mention Walt Whitman, Mark Twain and Freddy Nietzsche and invite you to complete the list.

But here’s what I wonder: Do you have enough time for both the self – promotion and the learning of your craft, particularly the storytelling aspects? (We know that you’re already a maestro of the number two pencil and the india ink bottle.) That can be tricky, that storytelling, and while it’s not rocket science, it is something that should be thought about and practiced. If a course is available in your area, take it. If not, find some books – and look at how your favorite predecessors managed the job. And will you have time to do that learning and still bask in the glow of the computer screen? You can network and tweet until your fingerprints vanish and you can tell yourself that your just doing your job.

The basking puts your own ego at the center of the enterprise, which is where the ego loves to be. What should be there is the work. The late, great Alfred Bester said it best: “Among professionals, the job is boss.”

I think that one reason our legislative apparatus is so shabby is that to acquire public office you’ve got to be a full time politician – that is, a good politician – maybe the most ego demanding of professions and one that requires a different skill set from being a wise and just governor. It’s a treacherous and vastly complicated world out there and to make decent laws for it you should be curious and well – read, anxious to be of service, and willing to learn, and not merely a gladhander and fund raiser with nice haircut.