HANCOCK TIPS HIS HAT TO ‘THE WAY THEY WERE’!!

(I would like to extend a personal apology to Jeff Deischer, author of the book reviewed below.  I intended to have this review posted last week, but due to issues far beyond my control, I could not.  Doesn’t mean it’s right to break a promise, My sincerest apologies, Jeff.)

THE WAY THEY WERE: The Histories of Some of Adventure Fiction’s Most Famous Heroes and Villains 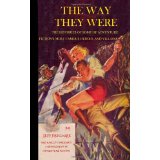 One of the many fantastic things about literature in general and about Pulp specifically is the richness and variety woven into the novels, stories, and tales that make up the genre.   Not only are heroes good and larger than life and villains evil and over the top, but there is a depth to these characters and the events creators thrust them into, a depth that over years has been explored in a myriad of ways.

One of the most fun of these, in my opinion, is the work of creators and scholars to not only establish timelines for these fictitious creations and their marvelous escapades.   Although many people might find actual history boring, there’s something inventive and exciting about taking a literary character and matching their exploits to a particular year or event, tying our fantasy into our reality.  And an even cooler step beyond that is finding connections between one character and others, connections that given the right phrasing and tweaking become familial or uncover possible links that could lead to here to yet untold adventures.   Several works of this type have been written in the last several decades, including chronologies, timelines, or just full on stories bringing characters you’d never imagine being drawn together into the same realm.

Jeff Deischer, author THE WAY THEY WERE, is one of those writers and creators who not only imagines the possibilities, but sets out to establish them, not simply by telling tales, but by providing thought provoking articles and essays.  Drawing first from his own interest as a fan and reader, Deischer adds in research and analysis as he takes on several questions that have plagued Pulp fans for years and, in other articles, he poses brand new theories and brings characters to mind that at least I as a reader hadn’t given much thought to in a while.

Deischer tackles well-traveled ground by covering points various and sundry about Doc Savage and The Avenger.  He also takes on famous characters from horror literature, tying Dracula and Frankenstein and the Phantom of the Opera to timeframes and situations.  Surprises lurk within these pages as well, including a multi article study of the works of Jules Verne and a most excellent essay about the use of Antarctica and Mars in early Pulp fiction.   Regardless of it being James Bond or Gullivar of Mars, Deischer brings new life to old characters, breathing into them questions and theories that show a different light on them.   One of Deischer’s strongest points is his willingness to present ideas that run totally the opposite of established concepts and then go on to back them up.   Add to that a writing skill that is both engaging and entertaining, THE WAY THEY WERE reads as much like a multi chapter pulp tale as it does a collection of essays.

FOUR OUT OF FIVE TIPS OF HANCOCK’S HAT-Insight and detail add to the education into these fantastic characters that THE WAY THEY WERE provides.
Share