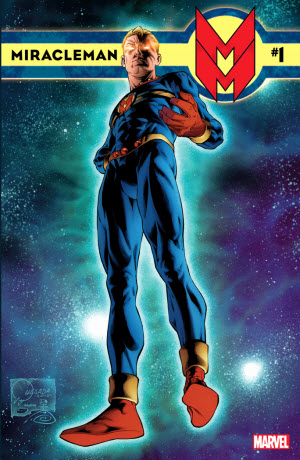 I won’t lie to you… I never thought this day was coming.

I never thought Marvel Comics would be able to untangle the legal Gordian knot that was the history of the character originally known as Marvelman when they announced they’d secured the rights from creator Mick Anglo nearly five years ago.  With all the people involved, all the hands through which the rights had passed, actually and allegedly, it seemed insurmountable.  But Marvel took its time, with the patience of a father untangling the box of Christmas lights, and now here we are, a couple weeks after Christmas, but given a wonderful and shiny present.

Originally presented in Warrior magazine in the UK and reprinted and continued by Eclipse, Marvel reprints the classic series in an all-new edition.  With the cooperation of the original creators, art has been recovered and restored, and presented in this impressive new edition.

Michael  Moran is a down on his luck middle class fellow plagued by nonsensical nightmares.  But when a protest at a nuclear power plant gets violent, his memory is jostled, he remembers a magic word, and is transformed into Miracleman, his heroic alter-ego from nearly two decades before.  He has to explain this amazing change to his wife, while elsewhere in England, a mysterious figure reacts violently to the news that the hero has reappeared.

Original writer Alan Moore’s name has been left off the series due to an agreement with him, but it’s no secret whose hand is behind the narrative.  This is a precursor to his work on Swamp Thing, which followed a similar path of modernizing a classic character for a new era, a tactic that proved so successful, the industry has been doing it ever since, with varying degrees of success, rarely equaling these original stories.

Marvel has done a bang-up job with the restoration on this book. The art, restored by Leach and Michael Kelleher, is amazingly sharp, down to every fine line. The new coloring is sharp and far more vibrant than the Eclipse version. They’ve even added in some extra nuance to the storytelling – in an early scene, Mickey’s windbreaker is now blue, and more closely mimics his Miracleman costume. The new lettering by Chris Eilopoulos is creative, with modern touches like a custom font for the dialogue of Guntag Borghelm, the mysterious physicist who “gave” Miracleman his power.

This first issue reprints three chapters of the original Warrior series, while the Eclipse reprint presented four in its first issue, suggesting the numbering will not match, which means the long-awaited issue #25 by Neil Gaiman may be a few months further off than expected.  The issue includes original sketches and production art by Garry Leach, a history of the creation of the character by Mike Conroy, and an interview with Marvelman’s creator, Mick Anglo.  Three reprints of classic Anglo Marvelman adventures fill out the sizable first issue in a fine way.

If you are of the generation that has only heard of this classic book, your chance to read it is finally here.  If you were here for its original run, the jump in quality more than warrants a re-purchase.