ALL PULP REVIEWS- by Ron Fortier 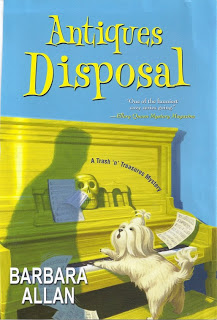 Vivian Borne is an eccentric antiques dealer who lives in Serenity, a small Midwestern  town situated on the banks of the Mississippi river.  She lives with her daughters, Peggy Sue and Brandy.  Together Vivian and Brandy solve murders that in one way or another deal with the business of antiquing.  Which is the simplest way to describe this series, of which this book is the sixth and has been described by other reviewers as being a “cozy” series if anyone really knows exactly what that means.
As a fan of hardboiled detective fiction, I’m assuming “cozy” refers to those mysteries wherein the protagonist is a little old lady ala Agatha Christie’s popular Miss Marple books or the old Angela Landsbury TV show, “Murder She Wrote.”  In other words, not my particular brand of tea; I prefer a headier beverage literature.  Still, every now and then one desires to try something different.  I decided I’d take a chance with “Antiques Disposal.”
It is probably one of the smartest things I’ve done in a while.  Why?  Well simply because the book is so damn funny, I honestly couldn’t put it down.  And the characters!  Oh, my God, is there a more dysfunctional group then the Borne girls?  Remember I said Brandy was Vivian’s youngest daughter?  Well she’s actually Peggy Sue’s daughter.  Yup.  Echoes of “Chinatown.”  You see Peggy Sue got herself “in trouble” as a young, unmarried girl and left her baby with her mother to raise figuring it was best for the child.  Did I mention Vivian suffers from a bi-polar disorder and is on medication?  Never mind that Brandy herself has a daughter….oh, forget it.  Its way too complicated for me to keep track of after only one visit with this eclectic bunch.  The thing is the writing is so clean and precise, even though you haven’t read those first five books  (something I hope to one day correct) the reader just goes with the flow.  There is a charm and decency to these characters that immediately grabbed me and had me caring for them from page one.
Look, here’s what every true mystery fan knows as a fact, series fail or succeed not on how brilliant the crimes are staged and then solved, but on how appealing and original the heroes are.  Don’t believe me, give this some thought.   Early fans of Sherlock Holmes and Dr. Watson came to demand more stories from Arthur Conan Doyle to read more about them and not the mysteries they dealt with, those became incidental.  The same can be said of every solid mystery series from Sam Spade, to Nero Wolfe and Nate Heller.  In fact one of those famous shamus plays a huge part in this book’s climatic dénouement finale in such a hilarious way, I will not spoil it for you.  It’s just too damn funny.
Okay, if you really need to know the plot, here it is.  Vivian and Brandy go to a storage unit auction, wherein the person who owned the unit stopped paying rental fees on it and the manager is legally free to sell its contents to recoup his or her loses.  These auctions have become very common among antique dealers and I believe there is even a reality show based on the practice.  So our two ladies end up winning the bid, begin transporting the boxed contents to their home and cataloguing them; everything perfectly normal and routine.  Until they return to the storage facility for their second trip and find the manager dead in the now empty unit.  The very next night someone breaks into Vivian’s home, attacks Peggy Sue leaving her unconscious and nearly kill’s Brandy’s loveable little blind poodle, Sushi.
From this point forward, both Vivian and Brandy are on the hunt for the killer and how they go about it so entertaining, pages simply fly by.  Sure, I was playing along and looking for clues too, but honestly, it was the ride I was enjoying to the max.  Bottom line, if all of the Trash ‘n’ Treasures Mysteries are as wonderful as “Antiques Disposal,” then sign me up for the long haul.
Hey, even if you end up not liking the book, did I mention there are recipes for chocolate brownies in it?  Now how can you go wrong with that?