MARC ALAN FISHMAN: X-Men – Built By The McMansion of Ideas 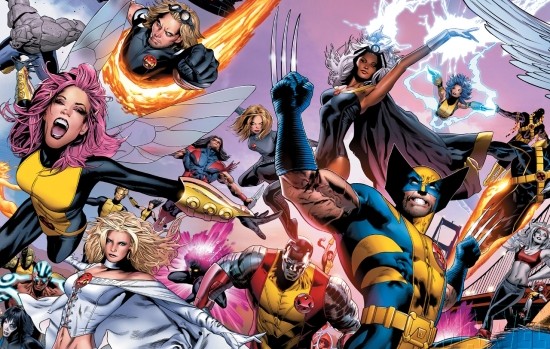 Wikipedia (truly the only place to learn stuff these days) defines McMansion as “a pejorative term for a large new house which is judged as pretentious, tasteless, or badly designed for its neighborhood.” When I read that term, one comic franchise comes to mind. Color me snarky this morning, kiddos, but I feel the need to rant about those kooky carnival clowns known as the X-Men. Let me go tape up my fists and put in my mouth guard. This one’s gonna get ooogly.

I’ve little doubt when Stan and Jack (I’ve no right to call them that, but screw it…) created the titular teens with wonky talents, it was done for a reason. More than DC, Marvel’s characters come pre-baked with personal turmoil. Peter Parker, the every-nerd… Bruce Banner, the mild-mannered man who can’t get mad… and who would not list Hank Pym, the small-then-big-then-small-then-big wife-beating man-of-science? The X-Men were no different. Here we had basically innocent kids being picked on and ostracized for being not normal. Make any parable of that you want. Black? Gay? Bi-sexual? Transgendered? Jewish? OK, probably not Jewish. More to the point though… in the beginning, the X-Men were a fantastic concept, anchored by amazing art. Of course they were a direct rip-off of the Doom Patrol, but let’s not get into that argument. Since their humble start in the funnies, the X-Men have since become a continuity-hampered, impossible to follow nightmare.

Let’s start with where we are now, nearly 50 years later. Currently, the X-Men are facing the ‘Schism’ hyper-mega-worthless-crossover. In it, as far as I’ve read, we’re getting a whole mess of fighting which will seemingly resolve into two camps of X-Men; Those of the squash, and others of the sandal. Points to those who got that reference. Why should I care though? Honestly, I like the idea, the basic concept of the X-Men. Persecuted for being different. Forced to save the world in an attempt to be loved. Always hated. Always feared. Never mind that there’s a guy dressed as a red and blue Spider that is beloved in New York.  But Schism is like so many other X-Men events of the last 20 years. Bloated, unneeded, and ultimately what has driven me to never purchase a single title of theirs.

OK, scratch that. I bought Joss Whedon’s Astonishing X-Men. All four volumes. And I loved the hell out of it. I could go into the reasons why, but it’s a whole ‘notha article. Let’s continue crapping on the current X-Men, shall we?

Can you name me who is on the team right now? Go ahead. I’ll give you a few minutes. Now, try to tell me who was on the team last week. Or last month. Or last crossover. Is Magneto a bad guy or good guy? Doesn’t Professor X walk now? And how many times has Jean Grey died? Remember when Wolverine healed faster than normal… meaning a gunshot might heal in a day or two. Now? He can basically regenerate from a DNA stain left in a dress. And he’s on 14 teams. And what future is Cable from? The same one as Bishop? And how many teams has Forge been on? And what is exactly the difference between X-Factor, and X-Force (aside from the fact that one is written well because Peter David knows what he’s doing, and the other is about Wolverine and Deadpool…)? That’s the problem, Mr. Andersen… your work raises too many questions.

Between Schism, Nation X, Necrosha, Second Coming, Age of X, Messiah Complex, Divided We Stand, X-Infernous, The Age of Apocalypse, Decimation, Deadly Genesis, The Phoenix Saga, The Dark Phoenix Saga and so many more ‘epic events’ in their published history… Is it any wonder when someone coos their name at me, I scoff? If you can work your way through all the team changes, villain swaps, death and rebirths, and chorus line, you’re a better reader than I.

And let’s get something straight. I love when comics have a rich history. I don’t read much Incredible Hulk (why? Jeph Loeb.) but I certainly know about many a good story. When you mention Hulk, Fantastic Four, or Captain America, I could easy spout out a few of the major plots they’re worked their way through over their careers in fiction. But the daunting, unrelenting, always-has-to-be-in-flux-or-who-cares mentality of the X-Franchises is simply too much. With every creative team change, invariably we get new rosters, newer costumes, and plot twits that retcon events made in play weeks before. And what for? If I were to postulate, the answer sounds simple enough to me. I believe the powers that be put too much emphasis on the action of the X-Peoples… and not nearly enough into the heart of the book. We get it… Wolverine is cool. Cyclops does in fact shoot lasers out of his face. But where’s the heart?

Peter Parker, for all the devil-pacts and power shifts and crazy life-altering events is still a guy with problems. His book never lost sight of that. OK, maybe it did, but I’m making my big point here. Captain America, whether he be Time-Bulleted back to the stone-age or replacing his own teen sidekick-turned-other-Cap is still the fish out of water. But the X-Men? They were introduced as hated and feared outcasts of society. Since then though… they’ve been in-fighting, whining, dying, and resurrecting themselves into oblivion. Frankly, it’s been enough to keep that entire section of the racks in the dead zone for as long as I’ve been a reader. The day Joey Q comes to me and asks what I’d do to fix it… He’ll hate my answer. It’s the one thing they haven’t done in forty years.

Will it ever happen? Sure it will. Look for it after Schism in X-Men: The Age of Fishpocalypse: Deadly Messiah Complex: The Return: Aftermath next summer!