LOOK INTO WHITE EYES THIS WEEK WITH DOC SAVAGE AND RADIO ARCHIVES!

The place: New York City. During the depths of the Great Depression, in the shadow of streamlined skyscrapers, reporters scramble for clues about an insidious wave of bizarre deaths – everyday citizens struck dead, the eyes in their lifeless bodies turned a sightless and ghastly white. The Blind Death has the teeming city paralyzed with fear; in desperation, civic leaders turn to the one man who can discover who or what is behind this gruesome series of murders: Doc Savage, the Man of Bronze.

From his offices high above the city, Doc and his band of trusted colleagues soon uncover a terrifying scheme to gather together all of the city’s criminal elements as a single and seemingly undefeatable force. Their intent: to seize the wealth of the Man of Bronze and destroy him once and for all!

“White Eyes”, the second in a new line of audiobook adventures from RadioArchives.com, is an epic tale of crime from the pen of Will Murray, heir apparent to Lester Dent, creator of Doc Savage. Featuring dramatic narration by Richard Epcar, “White Eyes” is a roller coaster ride of action and excitement that will leave you on the edge of your seat. Produced and directed by Roger Rittner, who joined with Will Murray to bring you both “The Adventures of Doc Savage” radio series and the thrilling audiobook “Python Isle”, “White Eyes” brings you ten hours of engrossing entertainment. Now available as both a ten audio compact disc collection priced at Just $31.98 and a ten hour digital download priced at Just $21.98, this new release from RadioArchives.com also features evocative cover art by Joe DeVito and two fascinating and exclusive audio interviews with the author.

Join the Man of Bronze for a suspenseful tale of action and adventure in “White Eyes”, the new Doc Savage audiobook now available from RadioArchives.com! 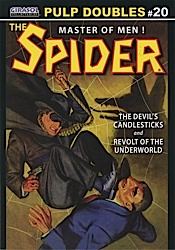 If you’re a fan of pulp fiction, you know that, in the 1930s and 1940s, there were three heroes who dominated the newsstands of America: the mysterious enemy of the underworld known as The Shadow, the tall and muscular Doc Savage, and a troubled and vengeful vigilante known as The Spider. Here at RadioArchives.com, we’re delighted to carry a full line of double novel reprints featuring all three of these iconic supermen – including three new books that have just been released: 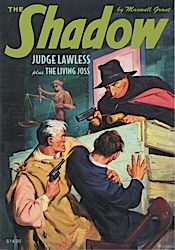 “The Spider Volume 20” features two thrill-packed adventures written by Norvell Page and Wayne Rogers under the pseudonym of Grant Stockbridge. First, in “The Devil’s Candlesticks”, a mystic murder spell falls over Manhattan, transforming America’s moneyed aristocracy into ruthless fiends and criminals. Only The Spider can battle a horror league that has turned America’s most wealthy citizens into lawless butchers! Then, in “Revolt of the Underworld”, America’s most ruthless criminals declare war on the Spider. Organized by the Fox, this tireless and devious band have succeeded in framing Richard Wentworth for the apparent murder of his fiancé Nita Van Sloan. Can the Spider successfully clear his name while also searching for the whereabouts of his beloved fiancée?

Then, in “Doc Savage Volume 49”, you’ll thrill as the Man of Bronze and his daredevil cousin Patricia Savage battle deadly menaces in two classic pulp novels by Lester Dent, writing as Kenneth Robeson: “The Terror in the Navy” and “Waves of Death”.

Finally, in “The Shadow Volume 51”, the Knight of Darkness battles strange supercrime in two thrillers by Walter Gibson: “The Living Joss” and “Judge Lawless”.

These beautifully formatted issues, priced at Just $14.95 each, feature classic cover art, interior illustrations, full-length stories reformatted for relaxed reading, and many special features to add to your enjoyment. Radio Archives carries the latest issues of these exciting publications, plus all of the back issues as well, ensuring you hours of edge-of-your-seat entertainment. Be sure to stop by RadioArchives.com and pick up your copies of these new releases right away!
New in Digital Downloads 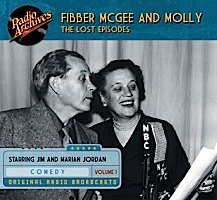 For years, entertainment on the go meant a transistor radio or a portable 8-track or cassette player. But nowadays, thanks to the new digital technologies, you can travel the world and take a world of entertainment with you to enjoy along the way! 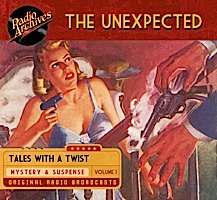 Whether you enjoy your entertainment on your laptop, your cell phone, or one of the many small portable devices now available, when you’re on the go, be sure to take the great sounding radio shows and audiobooks from Radio Archives right along with you. All of our digital downloads offer the same impressive audio fidelity as our compact disc collections and are available to you around the world around the clock at RadioArchives.com. And, best of all, with digital downloads, you’ll pay no postage or delivery charges!

This week, we’re excited to feature our new line of audiobooks for digital download – including the Doc Savage adventures “Python Isle” and “White Eyes”. “The Adventures of Doc Savage” radio series is downloadable, too, as well as radio classics like the long-lost daytime serial “Claudia”, the mystery whodunits of “Philo Vance”, the bizarre tales of “The Unexpected”, and the hilarious misadventures of “Fibber McGee and Molly”. Whether you’re a fan of drama, westerns, comedy, detectives, or musical variety, you’ll find it on the Digital Downloads page at RadioArchives.com. Place your order, download your shows and, within minutes, you’ll be enjoying some delightful audio entertainment.

Digital downloads from Radio Archive give you the best of everything: great shows, great selection, great sound quality, and all at great prices, too! Stop by RadioArchives.com today and see what’s waiting for you!Deal of the Day

Looking for a great deal in entertainment? Then you can’t go wrong with the Deal of the Day, a new feature now available at RadioArchives.com!

When you visit our home page, look for the bright yellow Deal of the Day tag on the top right hand side. Click on it and you’ll see today’s special deal. Sometimes a pulp reprint, other times a book, a DVD, or a compact disc collection, these limited time bargains are available at a fraction of their regular price – and there’s no minimum purchase required! Whether you want just that day’s special deal or whether you add it to the rest of your order with RadioArchives.com, the price you see is the price you’ll pay – and that price will reflect a discount of 10, 20, or even 50 percent off the retail price!

But remember: the Deal of the Day may change at any time! If you like what you see, order it right away; wait and it may be gone!

Visit RadioArchives.com often and check out the Deal of the Day. It’s a great way to stretch your budget, add to your personal library, and enjoy some timeless entertainment!
The Critics Love “Python Isle”For well over a decade, Radio Archives has maintained only the highest standards of quality, making our reputation by offering the very best audio fidelity, packaging, and customer service. So, when we decided to begin producing our own line of audiobooks, we wanted to make sure that they were the very best you could get anywhere at any price – and, thanks to the impressive talents of producer/director Roger Rittner and the skills of our world-class narrator Michael McConnohie, “Python Isle” had not only met but exceeded our standards and expectations.

But don’t take our word for it! Here are some reviews that have recently appeared:

In “Mass Movement Magazine”, Tim Cundle writes:
“It’s an incredible tale of an ancient tribe of Solomon, a queen and a sorcerer locked in political struggle, pirates, New York gangsters, undiscovered islands, lost explorers, hijacked zeppelins and much, much, much more. Michael McConnohie’s narration is nothing short of breath taking, capturing Dent and Murray’s frantic pacing perfectly whilst bringing each and every character to glorious life. ‘Python Isle’ is an astonishing accomplishment that I can’t recommend highly enough. Brilliant. Just…Brilliant.”

In “Comics Bulletin”, Penny Kenny writes:
“The skillful use of language and vocabulary is one of the delights of the story, and narrator Michael McConnohie’s smooth, rich voice is more than up to the task of bringing it to life for the listener. Without overdoing it, McConnohie brings out the humor in lines that could easily be glided over, and he creates tension simply by the way he reads a passage. I don’t think I’ll ever be able to read a Doc Savage book again without hearing McConnohie’s interpretation in my head. If you’re looking for a fun action-adventure story, or if you want to try some of the original pulp fiction, you need to give the ‘Python Isle’ audiobook a try.”

“Python Isle”, written by Will Murray and directed and produced by Roger Rittner, is available as an eight audio compact disc collection priced at Just $25.98 and as an eight hour digital download priced at just $17.98. Join the thousands of excited listeners who are now thrilling to the audio exploits of the Man of Bronze. Visit RadioArchives.com and order your copy of “Python Isle” and our latest audiobook “White Eyes” right away !
New in Classic Radio: Claudia, Volume 5 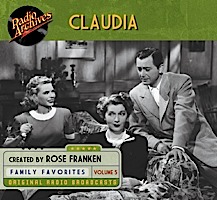 If you were a stay-at-home housewife in the 1930s and 1940s, you were most likely a fan of the soap operas. Ever-present on radio, and later on television, these daytime dramas of romance, heartbreak, mother love, sacrifice, and somewhat overdramatized family life became a staple in the lives of millions of avid listeners – many of whom planned their daytime chores around the five-times-a-week adventures of “Our Gal Sunday”, “Ma Perkins”, “Stella Dallas”, and the other dramas that dominated the airwaves between 10 AM and 5 PM.

But, in 1947, a new soap opera debuted that was far more quiet and gentle and down-to-earth than its strife-ridden neighbors on the radio dial. “Claudia”, based on the best-selling novel and play by author Rose Franken, told the tale of Claudia and David Naughton, two newlyweds just beginning their married life. Young, enthusiastic, and very much in love, they weren’t suffering from any of the crises or tragedies that were the common plot points of most daytime dramas. Instead, they were two people simply facing the many challenges of marriage and learning to live together as husband and wife. Thanks to insightful scripting, as well as charming performances by Kathryn Bard and Paul Crabtree in the leading roles, “Claudia” remains one of the unsung classics of radio’s golden age – as well as one of the most entertaining soap operas ever aired.

In “Claudia, Volume 5”, you’ll enjoy 24 more consecutive broadcasts that were first heard in April and May of 1948. Priced at Just $17.98 for the six audio CD set and Just $11.98 for the six hour digital download, this charming series is one you’ll want to share at home with your family – or keep it in the car and play one episode a day as you drive to or from work. Either way, we know you’ll be delighted by the endearing adventures of “Claudia”, now available from RadioArchives.com !

Sit back, relax, and enjoy this newsletter as an Audio Podcast! Click anywhere in the colorful banner at the top and you’ll automatically hear the Radio Archives Newsletter, enhanced with narration, music, and clips from our latest collections! This audio version of our regular newsletter is a pleasant and convenient way to hear all about our latest products, as well as the newest pulp fiction reprints, special offers, and much, much more!