Doctor Who Anniversary prequel – “The Night of the Doctor” 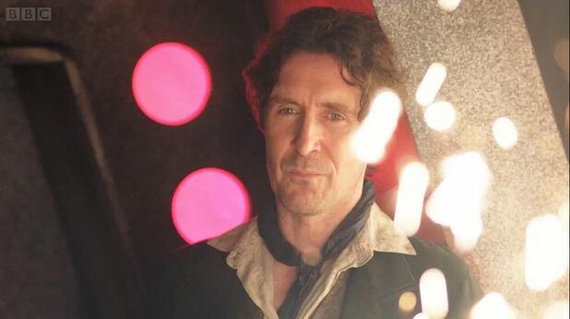 Rule One: The Moffat Lies.

Rule One-a: So Does The McGann.

After nearly a year of what showrunner Steven Moffat described as “lying through my teeth”, the prequel to the Doctor Who anniversary episode “The Day of the Doctor” reveals that the one fact that upset people the most is the one that was the biggest lie.

Watch, and squee with me.

OK, so technically, Paul McGann isn’t in the Anniversary episode proper, so his year-long claim that he wasn’t asked to take part wasn’t quite a lie, but it’s close enough.

And it was released on his birthday, which is just a case of the universe rolling the right way on occasion.

The Sisterhood of Karn made their first appearance in the Tom Baker adventure The Brain of Morbius.  The Sisterhood have had a long history with the Time Lords, as described in numerous prose and audio adventures.  The Elixir of Life, a potion that can restore a Time Lord to the living, was fed to The Doctor once before in that TV adventure.  He helped restore the Sacred Flame, source of the Elixir, to full power, the act that is alluded to here in this visit.

Terrence Dicks first used the planet’s name in the stage play The Seven Keys to Doomsday.  Presented between the end of the Pertwee era and before Tom Baker started his run, the play featured Trevor Martin as a new fourth Doctor, and Wendy Padbury, not as Zoe Heriot, but a new companion, Jenny Wilson.  This new Doctor fought the Daleks on the planet Karn over seven crystals which would give the bearer the tradition ultimate power and the ability to (dare I say it) rule the cosmos.  The folks at Big Finish did an audio adaptation of the stage play, with Martin returning in the role of The Doctor.

This is a look at a very different period of time for the series.  Not only are the Time Lords well known, based on Cass’ reaction, they are feared and hated, along with the Daleks, for what must be a massive amount of collateral damage.

“The change need not be random” – There’s been some questions over the years as to why The Doctor’s various incarnations are so different from each other, and why he seems to have no control over them.  The Time  lords clearly have the ability to select faces, as they off him a choice at the end of The War Games.  Romana has such control she chose to regenerate on a whim, sorting through a number of bodies before choosing the likeness of Princess Astra.  The most logical guess is that The Doctor has only ever regenerated in moments of extreme trauma, near death, and once or twice, after death.  It’s possible he might have more control if he were merely regenerating due to old age.  He can choose to regenerate, as he told the Cybercontroller in Nightmare in Silver, but he didn’t want to.

“I will not fight” – There’s so many callbacks (calls-forward?) to events in the series in this brief adventure, indeed, in just these few lines.  Dalek Caan first suggested that since The Doctor will not fight, or carry a weapon, he makes his companions into weapons.  A cruel (and incomplete) observation, but one that’s recurred through the series since its first mention.

“Because you are a ‘Good Man’ as you call yourself” “I call myself The Doctor” – The term “Good Man” is used in both the poem and the episode A Good Man Goes To War.  In it, Cleric Lorna alludes to the fact that on her world, the word “Doctor” means “warrior”.  This is from a Clever Theory that Moffat has held since he was a fan himself, that The Doctor’s name if where the word “Doctor” comes from on so many planets, and on most it means “healer”, and on others it has a much more dangerous meaning.

“Charlie, C’rizz, Lucie, Tamsin, Molly…” – those are Eight’s companions…not just from the movie, but from the alternative media like the Big Finish plays.  Save for Kate Stewart, none of the characters from the novels and audios (not to mention the comics) have been declared canon – this suggests these ones are.   Ice Warrior Ssard and Stacy Townsend don’t make the cut, they seem to have picked and chosen from whence to declare in continuity.

BBC AMERICA will celebrate the anniversary in grand style with a a week-long Doctor Who Takeover starting Monday, November 18, at 9:00am ET with marathons of favorite Doctors leading into new specials including a look into the science behind the iconic series with rock star-turned-physicist Professor Brian Cox (Wonders of the Universe, Wonders of the Solar System). The primetime specials will roll out throughout the week with Doctor Who: Tales from the TARDIS premiering Monday, November 18, 9:00pm ET followed by The Science of Doctor Who with Brian Cox at 10:00pm ET, Doctor Who Explained on Friday, November 22, 8:00pm ET, and a look back at Matt Smith’s time on the iconic series, Doctor Who: The Doctors Revisited –The Eleventh Doctor on Sunday, November 24, 8:00pm ET.

BBC AMERICA will premiere the new film An Adventure in Space and Time on Friday, November 22, 9:00pm ET. From Sherlock co-creator Mark Gatiss and directed by Terry McDonough (Breaking Bad), the film starring David Bradley (Game of Thrones,Broadchurch), Jessica Raine (Call the Midwife), Sacha Dhawan (After Earth) and Brian Cox (The Bourne Identity, X2: X-Men United) tells the story of the genesis of Doctor Who and the unlikely production team behind the series.

And then Saturday, the anniversary special, The Day of the Doctor, will broadcast globally and simultaneously, both on BBC America and in movie theaters across the country.

There will be a great deal of girlish screaming. And that’s just from me.