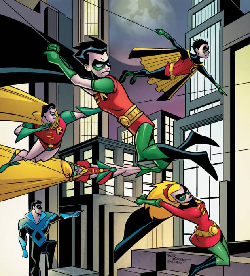 According to the folks I know who are better at this than I am, sidekicks like Robin and Jimmy Olsen came into existence primarily as exposition aids. By talking to them, the hero tells us, the reader, what he is thinking. It also gives the reader someone with whom to identify.

Sidekicks are not limited to kids, nor are they appealing only to kids. Dr. Watson is a sidekick to Sherlock Holmes. These guys, among others, were sidekicks to David Letterman.

I’m thinking about this lately because I’ve recently read some interesting things about so-called alpha and beta males. The conventional wisdom has it that women prefer alpha males, who are dominant, strong and aggressive. Hal Jordan is a stereotypical alpha male, according to this definition. So is Conan the Barbarian.

A beta male is less imposing. He doesn’t give orders. He listens. Instead of throwing his weight around, he cooperates. To hear right-wing propagandists, beta males are the result of feminism. And, if you read further (but you might not want to, because the descriptions have no relationship to life as we know it), you’ll see that the assumption is that beta males never have sex.

The science doesn’t support this, but what else is new? Neither, it turns out, are the stereotypes. Alpha males in the animal kingdom are, in fact, nurturing. Beta males are, in fact (or at least in the opinions of many women) really sexy.

Maybe that’s why I like the sidekicks. They seem more approachable and easier to engage in conversations.

Let’s look at an example from the comics, because that’s what this website is about. I’ve always preferred the Elongated Man to Mr. Fantastic. Same super-powers, but one is kind of aloof (or was when I was reading the series) and one is an excitable goofball sleuth.

It shows an actor’s range if he can convincingly play both alpha and beta. My favorite current example is Corey Stoll. He’s a totally douchebag alpha in Ant-Man and an uncertain beta in The Stain, where, even with that horrible wig they force him to wear, he’s still much more attractive.

With more women and girls in the marketplace, it’s my hope that we’ll see more good stories about the sidekicks. Especially the cute ones.