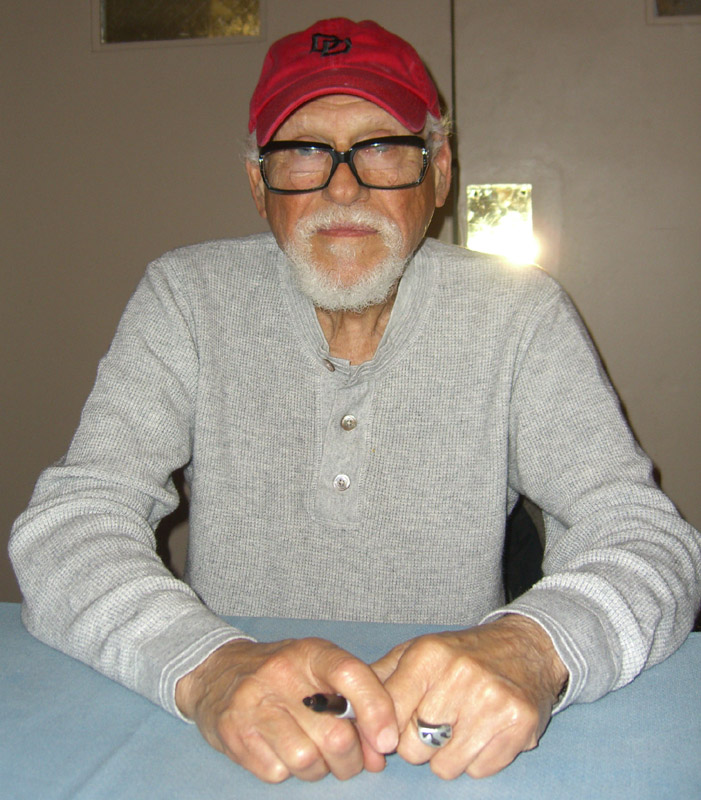 I regret to announce that my friend Gene Colan died at about 11 pm on June 23. Gene spent this last week in a quasi-coma state following a broken hip and complications from liver disease. He was 84.

I am terribly saddened to lose Gene. He was a gentle and deeply spiritual man, a bright light in every context, and those who knew him at any level were enriched by his warmth and generous nature. Below are some thoughts I cobbled together when he slipped from consciousness earlier this week.

I leave the historical perspective and details of Gene’s significant career to my friends Tom Spurgeon and Mark Evanier. For now, I mourn.

When I was in Morristown, New Jersey, in the early 1990s, there was a girl of about 12 or 13 who lived around the corner. Every time I saw her, she was out walking a German Sheppard puppy. I’d see the pair every two weeks or so. But as the years passed, I realized the girl’s puppy didn’t seem to age. My young neighbor was blossoming into a young lady, but her little dog was like Peter Pan, or Jefty in Harlan Ellison’s story. Eventually, I inquired and learned that the young lady took her young dog from the Morristown Seeing Eye. After she had house-broken and bonded with the little dog, she returned it when it was ready to be further trained to help one of the blind. And then she’d get another puppy and start over again.

It must be heart-breaking, I thought, getting to love something the way only taking care of it will allow you to love, just to say goodbye so quickly.

I recall this as I sit to compose my thoughts on what it’s been like working with Gene Colan this past year. It was a year ago, on June 21st, that we received word that Adrienne, Gene’s wife of 45 years, had been found dead in their apartment.

Since Adrienne’s passing, I’ve managed Gene’s business affairs. It was really just an excuse to spend more time with my friend; I funneled commissions his way and reminded him what was on the agenda; arranged signings and occasional appearances and that was it. These tasks had been Adrienne’s.

Following their mother’s passing, Gene’s children and I concluded that the best thing for Gene was to keep him as busy as possible. But we needn’t have worried; Gene knew instinctively what he needed do to survive with dignity. He mourned his wife daily but never allowed himself to become depressed. Instead, he labored at his art board as often as he could, losing himself—or perhaps finding himself—in his work. At 84, with one blind eye and the other eye failing, Gene Colan continued to create art at its highest level.

Sadly, that ended a few months ago. Two tumors on his liver, which appeared more than a year earlier, had grown much larger. Gene phoned me one night gasping for breath. He was hospitalized and a few weeks later he was taken to Calvary, a hospice in the Bronx. Gene wouldn’t go home again.

But Gene never lost hope. He continued to talk about his plans for the future. Mind you, this was not a feeble-minded man. An occasional short-term memory loss notwithstanding (and who doesn’t have those after high school?) Gene was clear-thinking and real-world oriented. He just wanted to go home. And he believed that wanting to was enough. This had been a recurring theme in his life. Gene wanted a career drawing comics. He wanted to work for Marvel. He wanted to be the best artist in his field. He wanted to marry Adrienne the minute he laid eyes on her. Gene believed that if he wanted something badly enough, focused and stuck to his guns, he’d eventually get it. And he usually did.

“There isn’t anything I have to be afraid of,” Gene said in his final interview. “Love is the answer.”

Each time we spoke at the hospice, Gene discussed what he was going to do when he got out. He remembered every promised, unfinished piece of artwork. He thought about moving back to Vermont. And there was still that livingroom wall he wanted to paint horses on.

I didn’t speak to Gene on Saturday. Then Sunday was Father’s Day and my entire family was home for a change. I figured I’d catch up with him on Monday.

Today is Monday. On the Hebrew calendar, it’s my father’s yahrzeit, the anniversary of the day he passed. Art is long but life is short. This morning Gene’s daughter Nanci told me that Gene fractured his hip over the weekend.

Gene had already been declining rapidly. Now, with this fracture, he was sedated into a sleep state and would not likely waken again. Without drinking, his already fragile kidneys would fail. His family and doctors decided there was no point hydrating Gene intravenously because if he did awaken, he would be in terrible pain and the morphine necessary to alleviate that pain would just put him under again.

Newspaper people are in the practice of writing obituaries long before well-known people actually pass away. That’s the demand of the trade. My grandmother would have considered that an ayin horah. I guess I do, too. But I know that when I get that call, I won’t be able to write a blessed word for a long time. So I’m writing this now.

This is not a eulogy–it’s some thoughts about a man I always liked very much and grew to love; a pal I spoke with nearly every day because he needed help. Now, at the end of the day, I realize how much he’s helped me.

I knew this day would come but it came too quickly. It has been a rare pleasure to work with Gene. He knew who he was—how valuable his contributions to the world of comic art have been—how prized it remains by so many. Yet he never felt less than grateful to anyone who’d even read a single panel that he’d drawn. Until he was too weak to hold a pencil, he put his whole kishkes into everything he drew—whether it was a $5000 commission or a small drawing for someone’s child. And he was never satisfied with his artwork but always eager to learn a little more, do a little better, try something new. At 84.

Gene would look at artists like James Bama and says, “Now that’s really something. Oh boy, can this guy paint!” He was a kid again looking at Milt Caniff’S renderings and floored by his friend John Buscema’s work.

My friend Gene was generous and funny and kind. He was exactly the type of man who should be drawing superheroes for young people to marvel at. Exactly and precisely. I’m richer for having known him. He was truly an original.

Seven to 10 days. It’s heart-rending growing to love someone that you know you’ll be saying goodbye to so soon, but worth every moment.