HANCOCK TIPS HIS HAT TO A TOME ON THE SHADOW!!

THE SHADOW-The History and Mystery of the Radio Program, 1930-1954
Written by Martin Grams, Jr.
Published by OTR Publishing
2011
830 pages 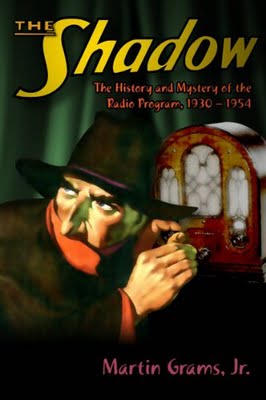 Reviewing Pulp is fun.  Reading a story full of derring do and dastardly do badders is invigorating.  Tackling a novel with larger than life heroes and plots that boggle the mind and senses makes me eager to pick up the next one and share with the world what I think.  I think the process of reviewing, of sharing insight and opinion on anything has to be, at its basis, fun for the reviewer.  Many would think, then, that tackling a book that is nonfiction, historical, and full of facts and such would be boring for a Pulp reviewer.  Maybe so.

But not this book.  Wow.

THE SHADOW-The History and Mystery of the Radio Program, 1930-1954, written by Martin Grams, Jr. opens with both of those on the first page-history and mystery.  Welcoming the reader in with opening paragraphs that could well be the lead in of a pulp story in any magazine or collection, Grams takes what some might consider mundane information only for the most die hard of radio and/or Shadow fans and makes this entire work a sprawling, epic narrative bulging not only with what happened, but why things happened and who was involved.  Grams tackles the variety of personalities involved in the development of the Shadow radio program and injects the feats and fallacies of all involved into every page.

This book is exactly what the title states, an extremely complex and comprehensive history of the phenomenon that was the long running SHADOW radio program.   Grams starts with the origins of the character as a narrator for pulp tales and step by step takes the reader through the growth spurts and growing pains of the program that truly made The Shadow a part of the modern pantheon of American heroes.  Although one would think that there would be urges to devote a lot of space to Orson Welles’ time on the program or to the intricacies and involvement of Street and Smith, Grams not only gives those and other well known aspects of this history their due, but he brings into light so many, one would daresay every aspect of this show and then does something even more startling.  He makes every bit of it interesting, from the details about all the creative minds involved to the advertising to the effect that this program had on the industry and society alike.

One stand out section of this fantastic work is the episode guide.  Grams is meticulous in not only describing the episode, but the way his guide is constructed lets you know not only where everything fits in continuity, but also gives you a sense of the impact of many of the episodes.  This is not simply a reprinting or even a presentation of a new broadcast log or notes taken on each episode.  Grams did a truly masterful job of providing information that was simultaneously educational and gratifying in this well done blow by blow episode guide.

THE SHADOW-The History and Mystery of the Radio Program, 1930-1954 is a must read for so many people-For the die hard pulp fan; for the Shadow fan; for the reader interested in OTR; for students of American culture; for the casual reader who wants to be exposed to multiple interests all at once; and probably several others I’m forgetting.   This may sit on shelves as a reference or research book, which it is, but it is also highly entertaining and engaging.

FIVE OUT FIVE TIPS OF HANCOCK’S HAT-The Shadow may know what evil lurks in the hearts of men, but nobody knows the Shadow radio program and its history like Martin Grams, Jr.