The Other Adrienne Colan 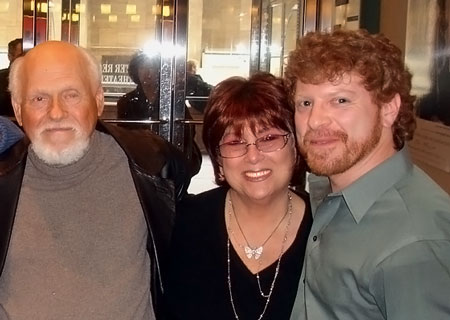 We are saddened to report the passing of Adrienne Colan, wife of Gene Colan, over this past weekend. Clifford Meth, pictured here at right with the Colans, adds this personal note for his friend.

The news hasn’t been great in the Colan home these last few months. If you’ve followed it, and if you’ve read between the lines, you’ve weeded out a kernel of truth and likely a whole cob of mistruths. And none of that really matters, now. It was all rubber-necking anyway.

But there are truths I’d like to share about Adrienne Colan, and chief among them was her and Gene’s love for each other. It read like an epic poem. The hardships and tragedies and obstacles were too numerous to count, but for half a century they remained at the center of each other’s universes. For richer or for poorer. In sickness and in health. For better or worse.

The Adrienne Colan you met at conventions was the real McCoy. She was tough and funny and uncompromising; warm and intelligent and spiritual. And her sense of humor was splendid. I think that’s where we met—at that dark crossroads where everything was tragic-comic. Our friendship existed outside of my friendship with Gene; we corresponded for decades, sharing dreams and fears.

And I guess I loved Adrienne. Now that the end has come amidst ashes and tears, I owe myself that honesty. I loved her attention, loved sending her a new story and when she got something I’d written and dissected it (and me with it); loved that she was intellectually curious about everything I shared and painfully honest with me…and with herself.

“Something I find fascinating about you is how you came to give yourself permission to live by your own standards without alienating those that love you and
you love,” she wrote to me last December, following a personal tragedy. “How and where does one go inside to know they have that right to live by their own truth?  I’m so interested in this because I’ve always had a POV about how I need to live my life but continued to allow myself to be crushed by [others]… I’ve allowed their version of right and wrong choices to annihilate my world view. That’s what the weight is about. And I can’t begin to tell you dear Clifford how awful it is [for] one’s psyche to still be crawling my way out of that at the age of 67. At this age I feel I acquiesced to letting myself ‘die’… But I’m responsible, so I eat.”

And there it was—that dark humor inside the sadness. So I eat. You could hear her say it.

“I can take both sides of the debate,” she wrote later. “I believe in G-d and that Judaism, at its root, is the healthiest and happiest way for a Jew to live and safeguard oneself from dangerous, misleading…spiritually harmful things. But I also believe that there’s a sickness that overtakes ‘religious’ people. There are many paths to G-d.”

But there were fine things, Adrienne. You did fine things. And not least among them, we may never have known Gene without you.

“When I read how well you express yourself, I often think of Gene’s first experience up at DC Comics, 13 years old, arriving with his comic-book size panels of little continuity drawings. Someone puts his arm around him and takes him inside to production. He shows Gene a sample of Bob Kane’s or Kirby’s or whoever was huge at the time. And Gene said to me, ‘I felt elated and diminished all at once.’ LOL!”

And then there was the diet. She was always going on a diet. “I’m a fat old lady!” she used to proclaim.

“Those directives of taking the high moral ground and spelling it out,” she explained of her childhood, “Those lofty notions to strive above the most base human failings… I found them helpful because I wasn’t getting anything even close to that at home. At the same time, around the age of 12, I found the ‘live and let live, honor all of life’ philosophy of Buddhism very appealing and comforting. And so it has been that way for me since that age to this day. That, along with authors whose voice and struggles of the mind and heart I identified with, convinced me even further how one must guard against injuring another’s spirit. So those things have had the biggest impact on giving me direction… It spoke to me.

Yes, I said, finally giving in. It really is about food, isn’t it?