Are These the Top 10 Ninja Movies?

Coming this week is the home video release of The Warrior’s Way and 20th Century Home Entertainment thought it might be a good time to examine the ninja film genre and determine which are the ten best. Their hope is that audiences will want to add the film starring  Geoffrey Rush (Pirates of the Caribbean: On Stranger Tides), Kate Bosworth (Superman Returns), Danny Huston (Clash of the Titans) and introducing to American fans international sensation Jang Dong Gun. Our review will appear soon and you can always judge for yourself. 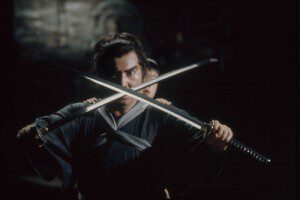 A story of honor, disgrace, vengeance, massacre and “the greatest team in the history of mass slaughter,” Shogun Assasin is by far a ninja movie classic. The swords swing and slice into action when a shogun’s wife is murdered and is forced into exile after being framed. He gives his infant son a choice between a ball, to represent freeing death and a sword, representing a life of threat and danger. His son chooses the sword and which marks the beginning of a violent struggle to survive in a sea of assassins. Of course, ComicMix fans also know this is adapted from the classic Lone Wolf & Cub manga first brought to the states by First Comics, with great Frank Miller cover.

From Akira Kurosawa, Seven Samurai tells the story of a group of samurai that turned their backs on fame and wealth to fight to protect a village of oppressed farmers. In what is easily one of the most epicninja-samurai films of all time, Seven Samurai weaves the violent genre with human emotion, courage and hope.

When demons wipe out an entire village with a mysterious plague, a wandering ninja, Jubei, teams up with the femme fatal, Kagero, to defeat the evil forces. With its mix of samurai action and supernatural fantasy, Ninja Scroll is the one of the most popular animated ninja movies around. Ninja Scroll is definitely an animated ninja tale meant for grown-ups!

REVENGE OF THE NINJA

In this martial arts action film, Revenge of the Ninja, a former ninja assassin begins a new life in America after his family is killed by other ninjas.  He ends up working for drug traffickers that he gets caught up in a face off. Revenge of the Ninja is known for having one of the most memorable fight scenes in ninja movie history. 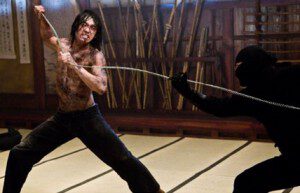 With its release in 2009, this ninja tale about a trained assassin has recently won its spot in top ninja movies. Raizo waits the day he can get his revenge on a secret society for killing his child-hood best friend. Raizo ends up being hunted down through the streets of Europe in what is one of the most action and bloody-packed ninja movies around.

Quentin Tarantino’s Kill Bill may not be an honorary ninja classic, but does play homage to earlier ninja films with its revenge-drama style plot. The story follows a former female assasin, ‘The Bride’, left for dead by her ex-fiancee, Bill, and his entrourage of assasins, as she seeks revenge until killing every last one of them.  The two part bloody-action flick has one of the greatest sword action scenes to date when The Bride, alone, takes on 88 ninja assasins called The ‘Crazy 88’s’. 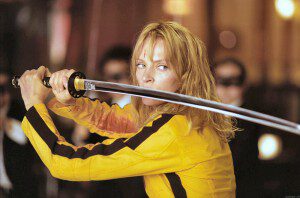 Famous from his array of Spaghetti Westerns and Euro Crimes films, Franco Nero, made his ninja debut in Enter the Ninja. While visiting a friend in the Phillipines, Cole is a approaced by villain Charlies Venerius, and propositions him to kill his friend. Cole refuses which sparks a  fest of ninja battles and one of a kind stunt choreaphy. Definitely one for the Ninjas!

A Martial Arts drifter with little respect for authority gets sentenced to an enlistment in an American Army base in The Philippines. After his platoon is attacked by a group of rebels during a Convoy mission, the colonel’s daughter, Patricia, is kidnapped and his entire platoon is killed. Joe has to rely on his street wits and ninja training in order to survive and save Patricia before it’s too late. 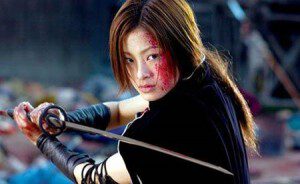 The main slayer in this ninja flick isAzumi, a female ninja expert, which only adds to its cool factor.Azumi is a young orphan girl trained by a Samurai to be an assassin. After being forced to fight her best friend to the death, Azumijoins a group of killer assassins that go after warlords that threaten to unleash chaos on Japan.

The least likely ninja flick makes the list with its story about four small turtles in New York City. After coming in contact with a strange substance called Ooze, they mutate into giant turtles with human mannerisms. A rat named Splinter becomes their mentor and trains them to be ninjas. The four pizza-loving turtles become super heroes in New York City.