The Herculoids – The Comlete Series 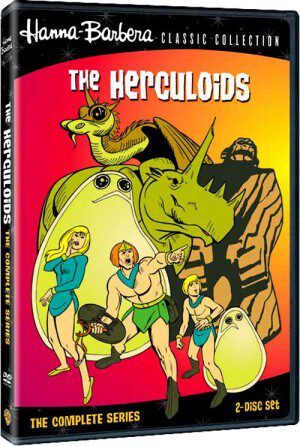 One of the more enduring concepts introduced on Saturday morning television in 1967 was Hanna-Barbera’s Herculoids. Some of this has to do with its fabulous Alex Toth design work and much of it has to do with the unusual assortment of people and creatures that band together to fight for survival in a hostile environment.

The series debuted on September 9 and CBS aired 18 original episodes before it vanished on September 6, 1969. Thanks to the miracle of on-demand DVD manufacture, Warner Archive has released the complete series on two DVDs this week. The eleven new episodes created in 1981 remain to be rediscovered.

The series was the brainchild of Toth but episodes were directed by Bill Perez, Paul Sommer, Ken Spears, Joe Ruby, and David Scott.  Clearly Ruby and Spears were inspired by this because there’s a direct correlation between this and their Thundarr the Barbarian (also available from Warner Archive). The Herculoids do not live on a post-apocalyptic Earth, but instead reside on the distant world of Amzot (oddly, not named until the “The Molten Monsters of Moltar” episode of Space Ghost, guest starring the Herculoids; a rare crossover at the time). The team of fighters is led by the husband and wife duo of Zandor (Mike Road) and Tarra (Virginia Gregg), accompanied by their son Dorno (Ted Eccles) and “Zok the laser-ray dragon! Igoo the giant rock ape! Tundro the tremendous! Gloop and Gleep, the formless fearless wonders!”

While the menaces were stock form the H-B factory, the series gets credit for letting Tarra have intelligence and work on a par with Zandor, a rarity in its day. Despite all the high tech gear that turns up, and its attractiveness to alien invaders, it appears the inhabitants are disinterested in technological evolution, happy with their fairly primitive lifestyle. They are nomadic, going wherever they are needed, from their more familiar homeland to the mysterious Gravite Island.

These were clearly not human beings given their prodigious abilities. Zandor, for example, had the strength of two terrans and used a slingshot that fired energy rocks. He also has a shield that returns to him much as Thor’s uru hammer can.

Some of their opponents, like Mekkano or Sta-Lak, want revenge on Zandor for something that has happened in the past, which enriches their mythos without giving anything away. Then there are menaces such as the “Destroyer Ants” which are accidentally hatched and threaten all Amzot life. With breathlessness, each thirty minute episode featured two stories so there are really 36 adventures in these two discs. The transfers are pretty good, although far from perfect. Hey are more than serviceable for those of us yearning to relive those carefree Saturday mornings when we weren’t bombarded with public service themes or teachable moments (beyond good wins out in the end).