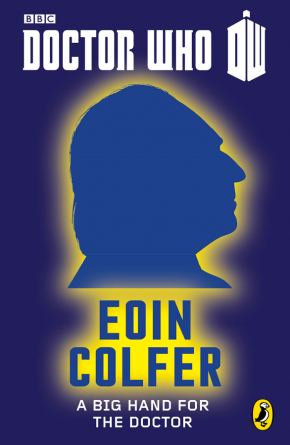 Some things we now know about the Doctor thanks to Eoin Colfer, writer of the Artemis Fowl books:

The Doctor has lost a hand before.

Colfer’s e-book, A Big Hand for the Doctor, is the first of eleven monthly releases, each featuring a different Doctor.  Eoin (“Owen”) chose the first Doctor, as played by William Hartnell, and takes advantage of that by doing an end-run around continuity and setting his adventure before the first adventure of the series.  In it, he is in Victorian London, recuperating from a battle with a band of organleggers who kidnap children from their bedrooms, wasting “not a molecule” of their biomass, resulting in their fearful moniker, the Soul Pirates.  The Doctor lost a hand in a sword fight with their leader, and while a new one is grown for him, a helpful alien surgeon fits him with a functional if unattractive metal claw.  His granddaughter Susan has disobeyed (of course) and set off after the Soul Pirates herself, only serving to get herself caught in their glittering tractor beam.  The Doctor must fight off the hordes of slow-witted pirates to save the children, as well as match wits with their leader, a young man who has chosen to wear The Doctor’s severed hand around his neck.

The short story (only about 5,000 words) is witty and charming, with wonderful tossaway details of still more adventures unseen and yet to come.  The story is laced with parallels to a certain classic of children’s literature, all tied up with a cameo by the author at the end, once again showing that even when he’s not aware of it, The Doctor can’t help but to help.

The authors of the rest of the anniversary adventures are a closely-guarded secret  Each will be revealed around the beginning of each month.  A number of names have been floated by numerous websites with little evidence or basis in fact, mainly to draw clicks to their pages.  The first book is available at many e-book dealers including Amazon.com.