Marc Alan Fishman: The Economics of Being a Starving Artist 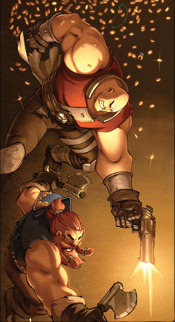 This morning a li’l post by Jim Zub, the author of the indie book Skullkickers, hit the viral airwaves. His post entitled “The Reality of Mainstream Creator-Owned Comics” set a plethora of shared Facebook posts ablaze in ‘likes’ and comments. Even my close and personal friend Gene Ha placed it on his wall with a very nice send up. By the way, when I say Gene and I are “close and personal friends,” I mean to say that he recognized me at Baltimore Comic-Con, actually talked to me for more than 10 minutes, and we once had pizza at Matt Wright’s (my Unshaven cohort) house. The article in question laid out in basic math how a comic on the rack of your favorite pulp store breaks down. It’s a sobering, but near perfect (as far as I can tell) account on how we little folk of Artist Alley aren’t in the business for the piles and piles of cash.

I won’t waste your time recanting the article verbatim. Go ahead and read it. I’ll wait. Back so soon? Great. I’d simply like to take up my little corner of the Internet this morning to add to Jim’s ending thoughts. He retorts “Skullkickers is the most expensive hobby I’ve ever had :D” Truer words, my friend, truer words. I decided to do some math myself. When you look at our meager books, you’ll see that things are actually looking up for us. After a year toiling on the con trail we have enough money in our little cash box to afford being able to register for the 16 conventions we wish to attend next year. And that’s it. It doesn’t cover the hotel rooms we’ll have to stay in. It doesn’t cover the gas to drive to them. It doesn’t cover the food we’ll eat. It doesn’t even cover the cost of printing the books we actually sell at the table. And we’re doing awesome. Not even kidding, kiddos.

When we started in the business, Kickstarter was just an incubating idea in some hipster’s noodle. Our lucky break, The March: Crossing Bridges In America netted us a whopping $500; it took us the better part of a year to complete. Mind you, we were as green as they came, and worked only on nights and weekends. And with many of those nights and weekends, we watched tons of cartoons, ate terrible food, and played Versus CCG until we fell asleep on the couch. But, if you distilled the man hours – from outlining the script, to taking the reference photos, to penciling, inking, lettering, coloring, and laying out the 54 page book? Easily 150 man hours. Simple math then dictates each of we three Unshavenauts earned a whopping $1.12 an hour to create the book. Take away from that total the $350 it cost us to buy our table at Wizard World Chicago? Well, I think you’re starting to get the picture.

They say the definition of insanity is doing something over and over again and expecting different results. And for five years, we have toiled mercilessly over our own books, driven halfway across the country to sit in convention centers 10 hours at a time, and pumped hundreds of thousands of unpaid hours of labor all to sell a whopping 1,408 copies of our wares in 2012 alone. But the kicker is we’re not insane. We never expected different results. Zub said it best – this is the most expensive hobby we could have ever had.

But unlike building model trains, collecting stamps, or memorizing the IMDB in hopes of crushing people at “Six Degrees of Kevin Bacon”… making comic books has produced something no other hobby could. The fact that I say without a quiver to my lip that “I Make Comics” is a badge of pride. Even ten years ago, when going to conventions as a fan became part of my vernacular, I didn’t honestly think I’d have it in me to sit on the other side of the aisle.

Now, it’s part of my identity. With Unshaven Comics, I have rubbed elbows and broke bread with industry legends. I have had some of the best meals with some of the greatest conversations I’ve been privy to in cities I would have never thought twice to visit. And most important … I’ve sold books (I dare not say thousands lest I make it sound better than it actually is) to complete strangers who then have returned to my table the following year to ask me “what’s next?” It’s a feeling I assure you no model train ride could touch.

And yes, there’s no smoke-screen to be had here. We indie folk all (probably) share that pipe-dream that our books will be noticed by some muckity-muck who will Pretty Woman us out of the Artist Alley and into the hearts of America. For those really daring, making comics is even a full time job (a luxury I could not afford, nor fathom). The reality of the numbers though prove what a zero-sum game it all is. Through the Image channel as Zub is doing, or the “out of our cars with a wish and a dream” as Unshaven Comics… being in the industry (if only on the very outer most ring of it) is a costly endeavor we do not for the bling. We do it for the love of the medium. We do it for the rush of having a fan. We do it because the movies and cartoons that play in our heads when we close our eyes can’t be turned off – they can only be crudely captured and splattered on a page. It may never pay our bills… but it fills our soul.

Simply put, this is an industry unlike most others. This is an industry being held together by duct tape, dreams, and desire. For those lucky few who are making the big bucks, we in the gutter don’t wish them ill will. We celebrate their successes as our successes. It’s a community. To be on the other side of that aisle – be you a long-time veteran, or a first time ash-can publisher… it’s a collected universe unto itself. One well worth the toil, the long drives, the longer conversations… and yes, the debt.

By the way, if you’d like to fill my soul, or any of the other starving souls here at ComicMix, do us a solid, and check out our holiday gift guide and spread the love.