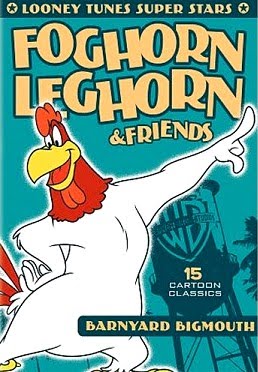 Warner Bros. Home Video is sitting on one of the most loved libraries of classic cartoons you could imagine. In many ways, their shorts are superior to Disney’s given the freedom the animators had for decades and the memorable characters generated as a result. At first they released the [[[Golden Collection box sets]]] which were a nice mix of material but they wound that down. Instead, they’ve now opted for a series under the [[[Looney Tunes Super Stars]]] umbrella with the first two releases coming late last year.

While these are welcome discs with cartoons we’ve not previously had available, it is still not the ultimate library we want (and the characters deserve). The two discs — [[[Foghorn Leghorn & Friends: Barnyard Bigmouth]]] and [[[Tweety & Sylvester: Feline Fwenzy]]] – each offer up two hours of cartoons but are a hodge-podge selection.

Foghorn Leghorn was created by Robert McKimson in 1946 and starred in 28 cartoons, good for a two-disc set that would have been complete. Instead, we get nine Foghorn Leghorn shorts plus six cartoons featuring “friends”. These date from the latter part of animation’s golden age, originally released between February 19, 1955 through April 21, 1962. All fifteen remastered shorts can be seen as matted-widescreen versions or the original full screen versions.

Foghorn and his distinctive speech pattern was modeled after Senator Claghorn, a popular character from the Fred Allen radio series. As usual, Mel Blanc handled the voices and made the rooster an oft-imitated classic. Foghorn’s adventures avoided the templating that many of the others experienced although a recurring theme was a rivalry with the Barnyard Dawg/George P. Dog or being sought as a meal by Henery Hawk. The shorts relied less on physical feats as opposed to verbal repartee.

The friends mentioned include Elmer Fudd vs. the Mexican crows Manuel and Jose (directed by the great Friz Freleng); the Goofy Gophers, Mac and Tosh; and even the [[[Honeymooners]]] character pastiches. 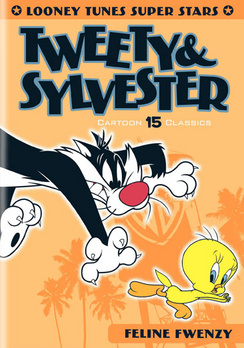 The other offering is somewhat stronger in that we have fifteen shorts
with the dynamic duo of Tweety Pie and Sylvester J. Pussycat, Sr. We
begin with their very first pairing from May 3, 1947 (which netted the
studio its first ever Academy Award for Best Short Subject) and have an
assortment through March 16, 1957 giving us an evolving and satisfying
series of chases. While we have previously unseen Foghorn shorts, all
the ones here have been on disc before.

Created by Bob Clampett in 1942, Tweety appeared in his own shorts plus
the ones with Sylvester, totaling 48 appearances through the years.
While he conceived the notion of pitting his wiseacre bird against a
black and white cat, he left before executing it. Instead, Freleng took
over and gave us Sylvester, whom he created in 1945 for a separate
short, plus a slightly restyled Tweety.  As popular as Tweety was,
Sylvester appeared in nearly a 100 cartoons on his own, or paired with
Porky Pig, Tweety or others. Blanc once more gave us all the voices,
basing Sylvester on a radio character with the same name he performed on
the Judy Canova Show.

The pairing proved enduring and gave us phrases that entered the pop
culture lexicon starting with “I tawt I taw a puddy tat”. On display
here is a nice assortment of the stories including the other one to win
an Oscar, “[[[Birds Anonymous]]]”. Sylvester is hungry and schemes of a way to obtain Tweety from his cage in Granny’s home. Tweety devises clever
ways to outfox his hunter and havoc ensues. For variety the setting is
changed or Sylvester tries to stop his obsession with the bird and these
variations on a theme are similar to works from great composers
exploring their muse. Freleng’s work is energetic and imaginative, well
worth watching once more.

Both discs have no extras but do carry the absurd warning that they are
“intended for the adult collector and may not be suitable for children.”
Heck, not once did I ever question letting my kids watch these funny
gems from the Warner Bros. factory nor should you.