REVIEW: Batman: The Brave and the Bold Season One 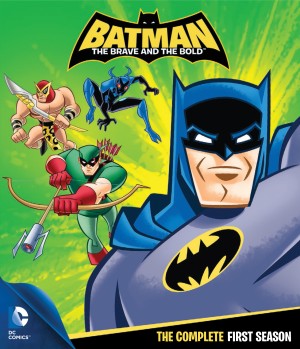 Batman in media has often been a victim of budgets and a fickle public’s tastes. His success or failure has also impacted the comic book incarnation. For example, after the camp live-action series crashed in 1968, the comic sales plummeted, freeing editor Julie Schwartz to take things back to the beginning and reinvent the gothic look and feel which evolved into the 1980s’ grim and gritty comics. Similarly, after a successive series of dark, moody and brilliantly execute animated series, it was most definitely time for something fresh.

Along came Batman: The Brave and the Bold, a bright, colorful, action-packed series that was a sheer delight to watch. This was a Caped Crusader who worked well with others, didn’t brood a lot but took his job far more seriously than his costumed companions. He operated in a universe where heroes and villains from across the DC Universe operated, letting animators stick in brilliant cameos and actually reinvent some of the characters most in need of a personality. Among the latter was the bearded blowhard Aquaman, ready to tell a fish story, naming the adventure with an ego-centric flourish.

Warner Archive has done us all a favor by collecting the 26-episode fist season and putting it all on two Blu-ray discs for an affordable price. The premise often involved a pre-credit sequence as the Gotham Guardian finished a case with one hero before moving on to another escapade with another. As with eponymous comic it was based on, some characters reoccurred more than others thanks to their popularity such as Green Arrow, whose rivalry with Batman for gear and gadgets made for nice humor. The current incarnation of Blue Beetle was seen as an amateur in need for tutelage and we could see him grow in confidence across the run. 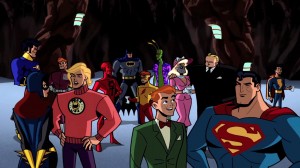 Clearly the writers, directors, animators, and voice cast had a marvelous time and it came through with every episode. The character designs came from across DC Comics’ decades long run so Black Canary look as Carmine Infantino first drew her in the 1940s while Plastic Man was at his loopiest. It was refreshing to see the JSA heroes fighting as veterans (notably the pugilistic cracks from Wildcat) while long-simmering character bits such as those between Batman and his wards rang true. 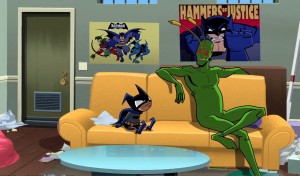 A standout episode was the musical “Mayhem of the Music Meister!”, with the incredibly talented Neil Patrick Harris voicing  the title villain. And like so many other installments, this one featured not just one partner but a small army including Green Arrow, Aquaman, and. Black Canary.

Given the Earth-3 villains now running amuck in Forever Evil, it’s fun to see their animated counterparts in the two-parter that closed out the first season — “Deep Cover for Batman!” and “Game Over for Owlman!”.

By some chance you missed this when it aired on the Cartoon Network, or you want a break from the sturm und drang of the current New 52, this is a treat you want.