Review: Empire State: A Love Story (or Not) 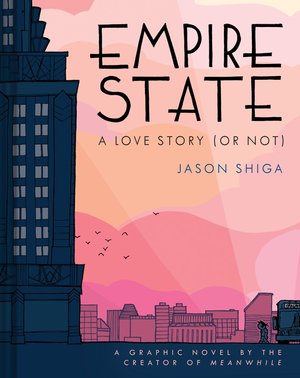 Jason Shiga is an acclaimed artist, currently best known for his previous offering [[[Meanwhile]]]. Now he has a brand new semi-autobiographical graphic novel, Empire State. Told in either red or blue monochrome to differentiate timelines, it tells the story of a sad sack slacker, Jimmy, who finally screws up the courage to visit his best friend and object of affection, Sara, in New York City. Thinking he could see America, he buys a bus ticket where his companions and the sights are far from the idealized trip he envisioned.

The story is all about expectations, reality versus fantasy and growing up. The subtitle, A Love Story (or Not) has everything to do with Jimmy and Sara and nothing about the world either inhabits. Sara has gone to New York to work in publishing and live a glamorous life but winds up in a tiny Brooklyn apartment, unhappily reading slush. On the other hand, she has found a boyfriend, Mark, an older graphic designer she found via J-Date. When Jimmy arrives, unexpectedly as it turns out, he has to rapidly adjust his expectations.

Shiga’s artwork has an appealing simplicity that effectively evokes emotional responses and he differentiates his characters nicely. It’s hard to tell, though, that Jimmy is an Asian-American and you only get that confirmed through dialogue. Since his heritage informs his home life, it should have been more obvious. It certainly enabled him to be a 25-year-old still living at home, tithing his paycheck to his parents, who still give him an allowance. As a result, Jimmy works in a dead-end job at the library, with rudimentary programming skills.

He’s an innocent, but on the one hand he knows who the novelist Richard Price is, yet on the other seems entirely oblivious about how to really write computer code. There’s being a slacker and then there’s being totally oblivious to the world around him. Jimmy is supposed to be a sympathetic hero but instead, I found him sadly pathetic. While his parents enable him, they are absent from the story so there’s much unknown about him.

Similarly, Sara has ambition but is a cypher as a character so we don’t know what she sees in Mark or why she remains friends with such a slacker.

While billed as a romantic comedy, it is anything but that, despite references to Sleepless in Seattle. Instead, it’s an interesting look at a pair of friends drifting apart, neither one you necessarily want to have coffee with.