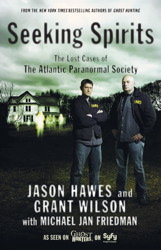 One of the major successes of the Sci Fi Channel was the arrival of [[[Ghost Hunters]]], a series focusing on the explorations into the paranormal as conducted by Jason Hawes and Grant Wilson. The Roto Rooter plumbers turned their fascination with the otherworldly by creating TAPS, the Atlantic Paranormal Society, based in Rhode Island. Along with other trained investigators, they have since 2004 been racking up terrific ratings for the channel. Other paranormal shows arrived, such as [[[Destination Truth]]] and the GH spin-offs [[[Ghost Hunters International]]] and the forthcoming [[[Ghost Hunters Academy]]]. The investigators have become regulars on the convention circuit so you may have seen them.

Jason and Grant, though, have been investigating the supernatural since the early 1990s, first individually and then as friends and partners. As a result, their files are filled with cases that have not made it on the air and have resulted in two books, the most current of which is [[[Seeking Spirits]]]. Again cowritten by our pal Michael Jan Friedman, a few dozen cases are explored in breezy short chapters with Jason and Grant ostensibly alternating the narration.

If you watch the show, you know what to expect here, and if you don’t know the show but find the paranormal interesting, then you’ll likely find this great bathroom reading.

Fans of the show, though, may be surprised to find that many of these cases involved the team using clergy to help cleanser the homes of spirits. The religious aspect and the use of priests are largely ignored on air but clearly, these people play a larger role in the overall world of TAPS. The writers touch on the role of religion but never go into much depth.

Another interesting revelation is that many of these investigations are spread over two or three days. On air, the team arrives, interviews and investigates in the course of a day, a far more compressed version of what really happens.

As a result, the book doesn’t really bring the investigators to life. You never understand how these husbands, fathers and plumbers manage to devote days to these investigations while still earning a living. They speak so little about themselves and how TAPS fits into their lives in favor of the individual cases.

Nor do they name their colleagues or give them much in the way of their due despite their contributions to the investigations. On air, the investigators’ personalities enliven the episodes, especially when they clash over events. Here, they are largely faceless, which is a shame.

The cases are varied throughout New England and the people come from all walks of life, showing how universal these cases can be. Some of are downright odd such as the man who finds his furniture rearranged and other deeply concerning such as the investigation leading to a site used by a cult for sacrifices. Not every case result in a paranormal conclusion but those that due, is neatly resolved to everyone’s satisfaction.

The duo talk about their tools and you learn what they are and how they’re used but again, take a backseat to the investigations. Their personalities don’t even come out through the chapters they narrate. The chapters are instead breezy as you get a sketch of the people, the problem, the investigation, and the conclusion. It’s nice to see variety in the reports, especially cases that would never make it to the screen because the problems are quickly debunked or the person’s personal issues are the cause. You really don’t gain much insight into our authors or learn much about the paranormal. Overall, this entertaining book is mostly for believers and fans of the show.