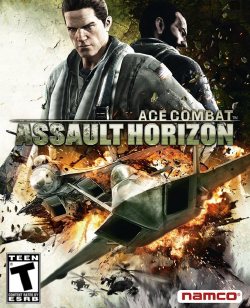 I’ve never been very good at playing flight simulators. Invariably, I always end up crashing into the ground or a mountain as I’m trying to swing the camera around to follow the bogey on my six. However, the most recent entry in the Ace Combat series has made me a fan all over again, and its new cinematic approach is a good reason as to why. Taking cues from the Call of Duty series, as well as listening to critic and fan reviews of previous titles, [[[Ace Combat: Assault Horizon]]] is the most diverse and fun title I’ve played in the series yet.

The game starts you off in a dream sequence taking out enemy planes over Miami. It’s here that you’ll first utilize the game’s star feature, DFM, or Dog Fight Mode. When tailing an enemy, pressing both shoulder buttons locks you onto your target and gives you a cinematic behind-the-plane view with a focused targeting reticule on the ship in front of you. Since most enemies are fairly adept at maneuvering out of missile locks, this is the ideal way to lock-on to foes to take them out. While in a lock, you also have to watch out for foes putting a lock on you, and the dogfights can get pretty harried in the skies above. Luckily, there are awesome-looking counter attacks you can perform if locked on to, which has your plane looping around after lining up arrows on screen and pressing the appropriate buttons on the controller. However, there tends to be a LOT going on on screen, so attention to details is a must.

The intense action is broken up with diverse mission types. On mission will have you taking out bogeys over a oil field, another will have you manning an attack helicopter, while still another has you piloting a huge bomber. Each set piece is exciting and inventive, and the control works well within each scenario. Careful consideration of which craft you choose (in the missions that allow it) is essential, as each planes special weapons are varied; be they air to air or air to ground missile type, bombs, etc. The scope and breadth of weapons available to you is pretty staggering.

There’s plenty of multiplayer fun to be had as well. Co-op mission obviously offer the greatest entertainment, but 8-on-8 versus multiplayer is a great time-waster too. There’s a great variety in the mission types for these modes, and will be one that certainly keeps fans entertained throughout.

And the control? Well, if you’re a flight-sim purist you may be disappointed to discover that your flight stick controller won’t work with this game due to the DFM. However, everything performs well, each plane handles differently, and, if you’re like me and always wind up a plane pancake, there’s a “flight assist” mode you can toggle on in the options, to make sure you don’t wind up mountain pizza.

For fans of the genre, Assault Horizon has a lot of new tricks, along with genre-favorite themes tpo keep long-time fans enticed. A great story, gorgeous graphics, and tight unique play control round out a solid flight-sim. If you want tons of action in a cool movie-inspired shell, this is a definite purchase recommendation.