HANCOCK TIPS HIS HAT TO NEW WESTERN PULP AT ITS BEST! 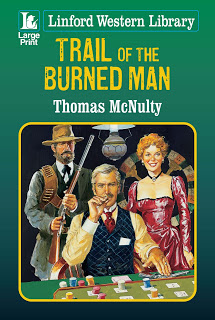 It’s always interesting to me to look at genres of fiction that were and still are staples within the realm of Pulp, but have somehow drifted away from those roots.  None of these is more apparent than the Western.  What once was fast paced, dead aimed storytelling full of heroes, villains, guns, horses, shootouts and standoffs has, at least in the hands of some authors, become more about exposition, analysis, and the human condition.   Many authors, well known ones even, have simply adapted a post modern take on literature to the western and by virtue of that have watered down an almost distinctly American form of storytelling.  Fortunately, there are some notable exceptions, men and women who still wear their six guns proudly and know that all a good man needs in the Old West is a woman better than he is and a villain badder than he is.

TRAIL OF THE BURNED MAN is definitely a New Pulp western written with the distinct flavor of the classics as well as liberally laced with the bravado and rapidity of a modern tale.  The characters are full and rich, complete portraits on a canvas of hard living, hair trigger decisions, and six gun action and adventure!  The story opens with Rafe Morgan, a man with a reputation, riding into a Wyoming town looking to make a new start for himself.  Almost immediately that gets complicated when Morgan gets into a fight with known badman Dutch Williams.  Scarred horribly by fire during the fight with Morgan, Williams vows revenge.  Morgan ends up staying on, working on Amy O’Hara’s ranch, even after her father, Ethan, also a Deputy U.S. Marshall, encourages Morgan to move on.   Soon, Williams enacts his plan for vengeance and involves Amy, Ethan, Rafe, an African American blacksmith, a Shoshone Indian, a young orphan, and an old ranch hand!  Oh, and did I mention the Sioux war party and a- no, I’ll let you find that one out yourself.

McNulty fires characters off like bullets from a hogleg.  This story is flowing with fully realized images of men and women, good and bad, lost and found.   The villain is grotesque and insane as any good Pulp villain would and should be.  What stands out for me most, however, are three characters.   I say three, but like many classic trios in the past, these men function as one, a sort of Trinity within McNulty’s story.  There’s Ethan O’Hara, the Marshall, Adam Washington, the blacksmith, and Black Wolf. the Shoshone Indian.  These three men have a connection that goes back beyond the start of this book and one that resonates loudly throughout the whole tale.  I’m not sure if McNulty plans to or not, but I would highly encourage him to consider more stories with these three larger than life heroically inspiring characters as the focus. 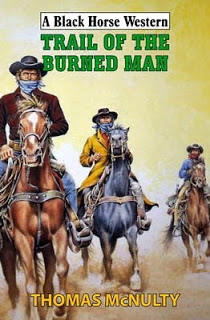 The only part of TRAIL OF THE BURNED MAN that bothered me in the slightest initially was some of the phrasing.  It just didn’t flow like most modern westerns I’d read in the last few years.  Then, about page six or so, it hit me.  It didn’t flow like most modern westerns because it’s not written like a modern western!  This is true old wild west Pulp at its best, full of descriptive phrasing, interesting, tight, concise exposition, and imagery and scene setting that doesn’t get in the way of the blockbuster narrative being told.   This is truly a New Pulp classic.

FIVE OF FIVE TIPS OF HANCOCK’S HAT-You won’t find a better New Pulp Western than McNulty’s TRAIL OF THE BURNED MAN.  Some will equal it for sure, but there aren’t any better.