Review: Nausicaa of the Valley of the Wind 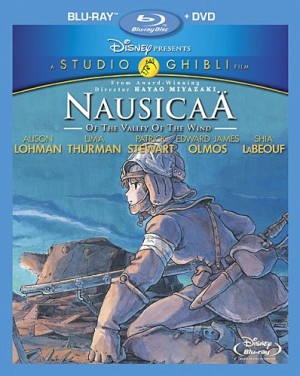 I will stipulate upfront that I am a casual, at best, reader of [[[Manga]]] and barely watch any anime. It does not mean, though, that I am unaware of the essential titles and creators. As a result, I have been aware of [[[Nausicaa of the Valley of the Wind]]] and the work of the legendary Hayao Miyazaki. When the Blu-ray edition of the 1984 animated version of this post-apocalyptic became available to review, I seized the opportunity to immerse myself in this classic world. I was not disappointed. It certainly beat trying to read the lengthy Manga that began in 1982 and wrapped finally in 1994. Obviously, the film is based on the earliest chapters and no other anime adaptation has been attempted to complete the tale.

In short, we’re on another world that is more fantasy than science fiction. We open a millennium after the Seven Days of Fire which destroyed the ecosystem. There’s a gas mask-wearing princess (the air is poisoned) and a village being encroached on by something called the [[[Toxic Jungle]]], making this an eco-fable or cautionary tale. And of course, mutated giant insects – every story like this has to have some of those. When an alien craft lands, the story ignites as the new arrivals stir things up for Princess Nausicaa and her neighbors.

The story is a familiar one as people struggle to survive in a world that has turned against them in protest. We get a lot of explication in the early (narrated by Tony Jay) going but once we get past that, things pick up speed. All along, though, the visuals are stunning.

This, I’m told, is old school anime but to a newcomer, it remains a visual feast with strong character designs and imagery. The story is also a struggle in that it’s so on-the-nose with its themes and actions that moments intended to be iconic are just short of laughable. There’s plenty of action and many scenes are set in the skies above the village. Nausicaa loves to fly and tools around in her jet-powered glider called a Möwe. The aerial sequences are most impressive.

The score leaves much to be desired and we’ll leave it at that.

The English language voices are form the 2005 home video release with a cast that includes Alison Lohman, Patrick Stewart, Edward James Olmos, Chris Sarandon, Uma Thurman, Jodi Benson, the immortal Frank Welker, and a young Shia LaBeouf. All give good, solid performances, not overwhelming the story or animation. The high-definition transfer is not perfect but certainly a step up from previous editions according to technical reports.

The disc’s special features offer up the original Japanese storyboards and  a featurette on the production studio, “[[[World of Ghibli]]]”. This includes a subtitled interview with Miyazaki, whose influence is missed, and we learn that the film was pitched first and when rejected, he started the Manga which proved successful enough to get the feature greenlit. There’s another subtitled 30 minute offering from Japan called “The Birth Story of Studio Ghibli” which is a little self-congratulatory. “Behind the Microphone” is eight minutes spotlighting the voice cast.

On the set’s second disc is a lengthy, two hour step-by-step of the film’s storyboards which are a textbook for storytellers and would-be animators.