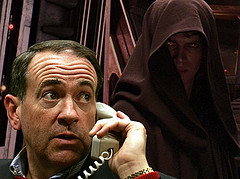 Here’s Mike Huckabee, in 2011, on Natalie Portman having a child with her fiancee before they’re actually married:

“There aren’t really a lot of single moms out there that are making millions of dollars each year by being in a movie.”

“I think it gives a distorted image that not everybody hires nannies and caretakers and nurses. Most single moms are very poor, uneducated, can’t get a job, and if it weren’t for government assistance, their kids would be starving to death and would not get healthcare.”

However, it seems that Gov. Huckabee has a short and/or selective memory.

Here’s Mike Huckabee, in 2008, on Bristol Palin having a child with her fiancee before they’re actually married:

“It ought to be a reminder that here is a family that loves one another. They stuck with each other though the tough times and that’s what families do.” … Huckabee said the surprise pregnancy announcement should not affect vice presidential candidate Sarah Palin’s support in the conservative and religious right communities. … “I’m grateful for the way she’s being supported by her family.”

I presume the difference here is that Natalie Portman is Jewish, or Huckabee thinks the father of Portman’s child really is Darth Vader. It makes as much sense as any other reason he can come up with for his double standard.